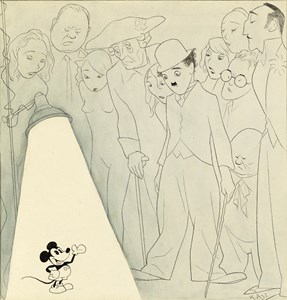 One of the leading caricaturists and illustrators of the first half of the 20th century in Germany, Karl Arnold studied drawing in his native Neustadt before entering the Academy of Fine Arts in Munich in 1901, where he trained under the artists Karl Raupp, Ludwig Löfftz and Franz von Stuck, and where among his fellow students were Wassily Kandinsky and Paul Klee. In 1907 Arnold contributed his first illustration to the satirical magazine Simplicissimus, with which he was to be closely associated for much of his later career. Arnold spent some months in Paris between 1910 and 1911 from where he continued to contribute illustrations for Simplicissimus and its rival, the art and literary journal Jugend. In 1913 Arnold was, along with Kandinsky and Alexej von Jawlensky, one of the founders of the Neue Münchener Sezession (New Munich Secession) group, and contributed to its first exhibition, held the following year. Between 1934 and 1936 he served as the director of Simplicissimus, and in 1936 engaged in an exclusive contract as a cartoonist for the Berliner Illustrierte Zeitung. Beset by illness and following a stroke in 1943, Arnold produced very little work before his death in 1953, not long after being appointed an honorary member of the Academy in Munich. Arnold’s graphic work began to be recognized again in the 1970’s, with a retrospective of his drawings and caricatures held in Berlin and elsewhere in 1975 and an exhibition dedicated to Simplicissimus at the Haus der Kunst in Munich in 1977. As has been noted of Arnold’s illustrations, ‘His unique quality as an artist is the brilliant characterisation of types and the extraordinarily telling conjunction of picture and caption.’