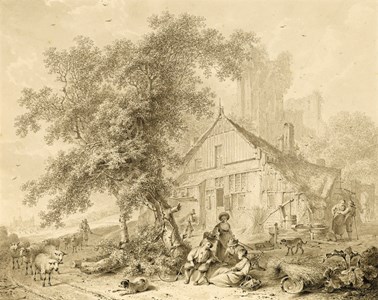 Active as a painter, decorator, draughtsman and printmaker, Hendrik Meyer (or Meijer) the Younger was admitted to the Drawing Academy in Amsterdam in 1764, at the age of twenty. Four years later he settled in Haarlem. Meyer made a specialty of large-scale mural paintings, and in 1764 established a behangelfabriek - a workshop that produced decorative wall paintings for interiors - in Haarlem. He became a member of the artist’s guild in 1769 and not long afterwards of the Haarlem Drawing Academy, of which he served as director in 1772. Around 1774 he travelled to England in the company of his fellow artist Wijbrand Hendriks, a trip which inspired both artists to work in watercolours. On his return to Holland Meyer lived and worked in Leiden and Amsterdam. Sometime after 1779, however, he returned to London, where he seems to have worked for the remainder of his career, and where in collaboration with Timothy Sheldrake he produced a series of a dozen soft-ground etchings of landscape subjects. Among his pupils were Egbert van Drielst and Leendert Overbeck.Meyer was a prolific draughtsman, producing landscapes and city views - in black chalk, ink, watercolour and gouache - which are notable for their fine detail and meticulous technique. Several of his finished drawings took the form of series of months of the year, and these were, like those of Jacob Cats, especially popular with collectors. Meyer’s landscapes are almost always imaginary, however, and their somewhat contrived compositions engendered a certain amount of criticism in the later years of the artist’s career. Drawings by Hendrik Meyer are today in the collections of the Boijmans van Beuningen Museum in Rotterdam, the Teylers Museum in Haarlem, the Fries Museum in Leeuwarden and the Royal Museum of Fine Arts in Brussels, as well as the Albertina in Vienna, the Städel in Frankfurt, the Pushkin Museum in Moscow, the J. Paul Getty Museum in Los Angeles, and elsewhere.