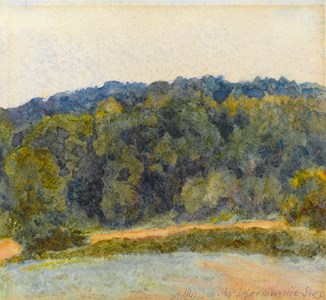 The eldest of seven children, Helen Paterson was raised in Altrincham in Cheshire until the age of thirteen. Following the death of her father her family moved to Birmingham, where she began taking lessons at the Birmingham School of Design. Her success at the school, where she won a number of artistic prizes, led to her acceptance at the Royal Academy Schools in London in 1868, although by 1872 she had transferred to the Slade School of Art. To earn a living, she undertook commercial projects as an illustrator while painting watercolours in her spare time, and it was under her maiden name that she first established a reputation as an artist. Helen Paterson’s illustrations were to be found in several magazines and books, eventually leading to a position as an artist and journalist for the newly founded magazine The Graphic. In 1874 she married the poet and writer William Allingham. The couple settled in Chelsea, and Helen was able to give up commercial projects and concentrate on her watercolours. She first exhibited at the Royal Academy in 1874, and the following year was the first woman to be elected as an Associate of the Royal Society of Painters in Water-Colours, becoming a full member in 1890. In 1881 the Allinghams settled the village of Sandhills in Surrey, and there Helen began to concentrate on landscape painting and in particular the views of rural village life and traditional English cottages which remain her best-known work. She continued to paint such views after her return to London in 1888 and her husband’s death the following year, and her success as an artist allowed her to support her family throughout the reminder of her career. Apart from brief visits to Venice in 1901 and 1902, Allingham’s travels were confined to England. Her reputation was at its peak in the 1890’s, and her work was exhibited widely in England and abroad.