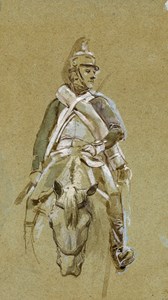 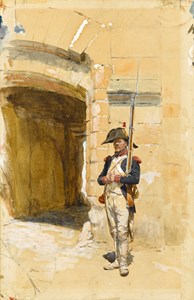 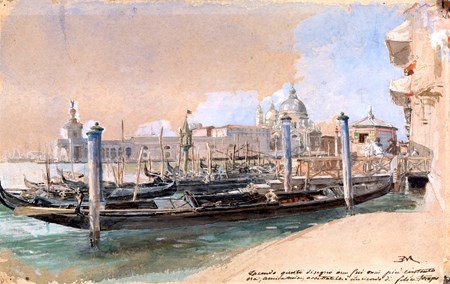 ‘The incontestible master of our epoch’, as Eugène Delacroix described him, gives some indication of the esteem in which Ernest Meisonnier was held by his contemporaries, critics and the public. Enjoying a career of more than fifty years, he was one of the most famous painters of the 19th century, renowned both in France and abroad. Largely self-taught as an artist, he began his career as a designer of wood engravings for book illustrations. Although he exhibited paintings regularly at the Salon from 1834 onwards, winning several medals in later years, Meissonier’s first taste of international fame came at the Exposition Universelle of 1855, when his painting of A Brawl was bought by Napoleon III as a present for Prince Albert of England. Much of his work was on a very small and intimate scale, and reveal the influence of the Dutch genre painters of the 17th century that he had studied as a young apprentice. His subject matter included scenes of 17th and 18th century life, as well as more contemporary depictions of men at leisure, all painted on small panels and executed with a meticulous attention to detail. From the late 1840’s onwards Meissonier also devoted much of his time to military subjects, basing his paintings on drawings and oil sketches of soldiers, their horses, uniforms and equipment, mostly taken from life. From 1876 onwards Meissonier stopped exhibiting at the Salons, preferring instead to show his work in the annual exhibitions of the Cercle de l’Union Artistique. Meissonier enjoyed considerable financial success as a painter and was the first artist to be awarded the Grand Cross of the Legion of Honour. He also produced a small number of wax sculptures of horses, intended primarily as aids for his paintings and not cast or publicly exhibited until after his death.