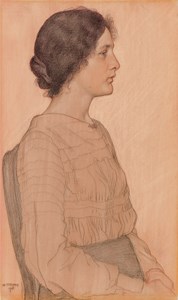 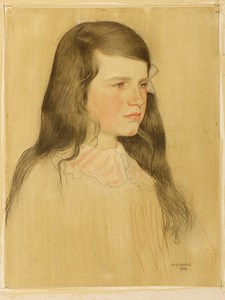 The Scottish artist William Strang was a student of Alphonse Legros at the Slade School of Art in London between 1876 and 1880, and after his graduation continued to assist Legros in his printmaking class. Much of the first two decades of his career was spent as a printmaker, and he produced etchings of landscape and pastoral subjects, as well as some 150 portraits of prominent artistic and literary figures. (A significant collection of Strang’s graphic work is today in the collection of the Glasgow Museums.) A founder member of the Royal Society of Painter Etchers in 1880, Strang was elected an Associate Engraver at the Royal Academy in 1906 and an Academician Engraver in 1921, the year of his death. The realism and psychological intensity of his etched portraits reflect the particular influence of Legros, and was carried through into the paintings Strang began to produce around the turn of the century, and which came to dominate his output in the latter half of his career.Strang exhibited his first oil painting at the Royal Academy in 1892, and later in the decade showed paintings at the New English Art Club and at the first Secessionist Exhibition in Vienna. By the turn of the century Strang was exhibiting paintings regularly alongside his etchings. In 1901 he completed a series of ten large mural paintings on the theme of Adam and Eve for the library at Compton Hall in Wolverhampton, commissioned by the collector and patron Laurence Hodson. Strang was also a gifted portrait painter, whose sitters included Thomas Hardy, Lucien Pissarro and Vita Sackville-West. Although his work was widely admired, as one contemporary critic noted, ‘Strang is not readily rubricised: he is neither an Academicist nor a Classicist, nor a Romanticist; neither an Impressionist nor a Post-Impressionist; he presents himself indeed to the impatient or merely casual observer in Protean illusiveness. Yet Strang is not only a very solid and unevasive personality but a singularly simple and ingenuous one to boot.’