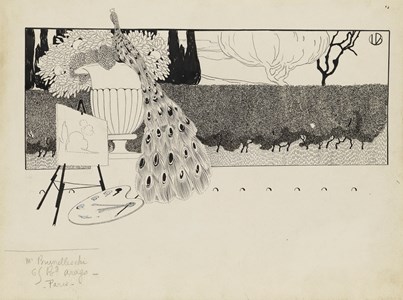 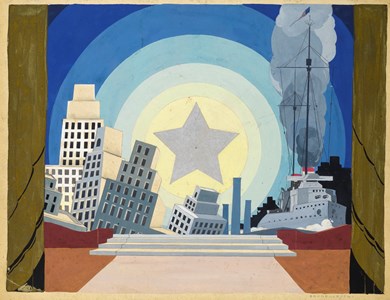 Born in the Tuscan town of Montemurlo, near Pistoia, Umberto Brunelleschi was an illustrator and costume designer by trade and a Parisian by adoption. In 1900, following his studies at the Accademia di Belle Arti in Florence, he settled in Paris. He was to live and work in France for almost his entire career, although he also spent some time in Germany, Italy and America. In June 1902 he began providing illustrations for the journal L’Assiette au Beurre, which had been founded the previous year, often signing his work with the pseudonym Harun-al-Rashid. Admired in particular for his fashion illustrations, Brunelleschi worked for a large number of French, Italian, Spanish, English and American magazines, including La Caricature, Journal des Dames et des Modes, Le Monde Illustré, Le Rire, Le Gazette de Bon Ton, Il Giornalino della Domenica, Harper’s Bazaar, The Tattler, Vanity Fair and Vogue. Much of his work was also issued in the form of pochoirs, or hand-coloured prints made from stencils, which were greatly in vogue in France in the early 20th century, particularly for fashion plates. Between 1919 and 1920 Brunelleschi served as artistic director of a short-lived journal, La Guirlande d’Art et de la Litterature. He is also regarded as one of the finest book illustrators of the Art Deco period. He provided illustrations for numerous publications - including editions of Boccaccio’s Decameron, Alfred de Musset’s La Nuit Vénitienne and Oeuvres, Voltaire’s Candide and L’Ingénu, La Fontaine’s Contes, Casanova’s Mémoires and many others - and his gouache drawings for such illustrations were exhibited at the Salons in Paris and at the Venice Biennale. Towards the end of his career Brunelleschi concentrated mainly on book illustrations, many of which display a pronounced erotic content.