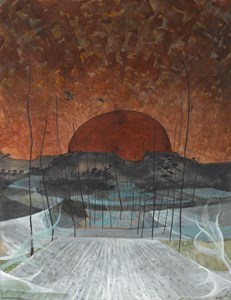 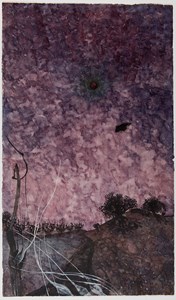 Born in Newmarket in Suffolk, Alan Reynolds left school at the age of fourteen, and began drawing and painting at about this time. He received little formal artistic training, however, until leaving the Army in 1947, when he enrolled at the Woolwich Polytechnic School of Art. His work was included, as a non-member, in the London Group exhibitions of 1950 and 1951 and, while still enrolled at art school, the work of the young Reynolds was included in three exhibitions at the Redfern Gallery in London. The same year he won a scholarship to the Royal College of Art, where among his fellow students were Frank Auerbach, Bridget Riley, Peter Blake and Leon Kossoff. Although Reynolds received the Painting Medal in his first year, he did not remain at the RCA for long. In 1952 he exhibited twenty-four small paintings in his first one-man show at the Redfern Gallery, followed a year later by a second show at the Redfern and, in 1954, at the Durlacher Gallery in New York. Reynolds achieved almost instant success as a landscape painter, with the sale of nearly all of the paintings, drawings and watercolours he exhibited at the Redfern; indeed, by the time he was thirty his paintings had been acquired by the Museum of Modern Art in New York, the National Gallery of South Australia, and the Tate, among other institutions. In later years Reynolds taught drawing at the Central School of Arts and Crafts and painting at the Saint Martin’s School of Art, both in London. In 1958, however, Reynolds largely abandoned drawing from nature, and began moving away from landscape painting in favour of a new interest in abstraction. A decade or so later, he gave up painting entirely, and began working on constructed white reliefs. These have made up the bulk of his output since, along with woodcuts and tonal drawings. Reynolds’s work is represented in several museums in the UK, America, Canada and Australia.