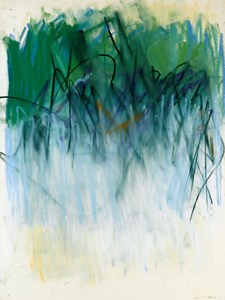 The scholar Jane Livingston has written that, ‘[Joan] Mitchell’s work on paper was something she separated entirely from her painting activity and an endeavor about which she apparently had mixed feelings. She would say that her pastels were “lady paintings”. She did not want to be called a lady painter unless she was using the term herself, nor did she truly invest her deepest energies or intellect in these drawings…Mitchell worked at varying scales at the Montparnasse studio, always on paper, but preferred to show her oversize pastels rather than the small ones…Although making drawings probably never rivaled printmaking in her own priorities, her place in Montparnasse gave her respite, and a way of continuing to work that seems to have been cyclically therapeutic. Ironically, her activity in this studio was literally toxic to her; she worked in a badly ventilated space, using powdery substances, including cadmium, which certainly exacerbated the lung problems that became more and more debilitating.’