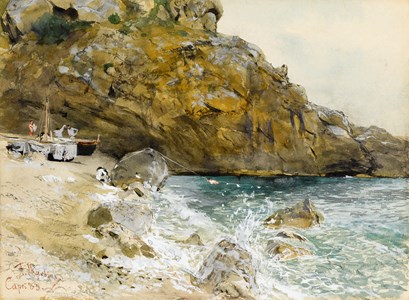 Franz Skarbina studied at Akademie der bildenden Künste in Berlin, as well as in Paris, before setting up his first studio in Berlin in 1869. In 1878 Skarbina had his first public success with a large, sensational and somewhat macabre painting of a recent suicide, rope still around his neck, returning to life and waking up among the corpses in the Berlin morgue. Skarbina enjoyed an extended stay in Paris in 1882, and the following year exhibited for the first time at the Salon. He also spent a year in Paris in 1885, and his paintings of Parisian streets are particularly fine examples of the interest in urban life that would carry through into his paintings of Berlin in later years. Skarbina continued to show his paintings in the French capital throughout his career, winning a bronze medal at the Exposition Universelle in 1900. Appointed a Professor at the Academy of Fine Arts in Berlin in 1888, he also taught a number of students privately. In 1891 his painting Promenade in Karlsbad won a gold medal at the Internationalen Kunstaustellung exhibition in Berlin, and the following year he became a founder member of the Gruppe der XI, alongside Max Liebermann and Walter Leistikow. Skarbina joined the Berlin Secession movement in 1899, exhibiting with the group between 1899 and 1901.Writing in 1901, the German critic and art historian Franz Servaes noted of Skarbina, ‘This artist is surprisingly versatile. There is no phase of modern painting which he has not tried with success...he [has] become one of the finest painters of light Germany can boast of. Changing from subject to subject, full of variety in technique, he has remained true to himself in that one point – hence his great success...Skarbina has always striven to improve himself, and did not even as a mature man disdain to seek instruction from some of the great Paris artists. He has, therefore, been reproached with being too ‘Parisian’ but he did not shrink from continuing the technique acquired in Paris, and to utilise the excellent Paris models and motives for his pictures...Whatever he has learned in Paris he turned to account afterwards in his native town, in his numerous pictures of Berlin street-life and Berlin interiors.’ A memorial exhibition of Skarbina’s work was held shortly after his death in 1910, and paintings and drawings by the artist are today in the collections of the Märkisches Museum, the Berlin Museum and the Staatliche Museen zu Berlin, all in Berlin, as well as the museums of Bremen, Dresden, Hamburg, Hannover, Kiel, Munich and Potsdam.