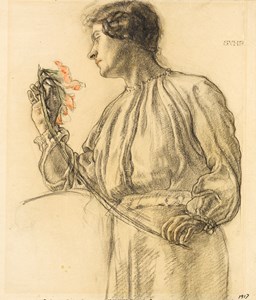 One of the leading paintings conservators working in America in the 20th century, William Suhr was born in Germany to parents who were naturalized American citizens. He was trained as a painter at the Akademie in Berlin. There he met the art historian Max Deri, who introduced Suhr to the practice of painting conservation and restoration. At this time there was no formal training process or schools for conservation, which was still very much a family business with methods kept secret by its practitioners. Within a few years Suhr had established a thriving practice as a paintings conservator in Berlin, working on paintings in the collection of the Kaiser Friedrich Museum in the early 1920’s, where he coming to the attention of Wilhelm Valentiner. When Valentiner left Berlin to become director of the Detroit Institute of Arts in 1924, he arranged to bring Suhr to the museum three years later. In 1935 Suhr transferred to the Frick Collection in New York, where he worked for over forty years until his retirement in 1977. He served as Chief Conservator at the New York World’s Fair in 1939, and also worked for numerous private and institutional clients, including museums in Chicago, Cincinnati, Cleveland, Detroit, New York, St. Louis, San Francisco and Toledo, as well as for collectors and art dealers in New York, notably the firm of Rosenberg and Stiebel and Kennedy Galleries. He conserved many of the most significant Old Master paintings in American collections, and was particularly noted for his work on Rembrandt paintings. Suhr’s extensive archives, made up mainly of photographs of paintings he worked on, along with his treatment notes, as well as personal correspondence and documentation of his own artwork, is today in the collection of the Getty Research Institute in Los Angeles.