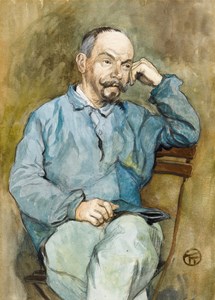 Relatively little is known of the painter and draughtsman Lucien Ott, who began his career as a designer of furniture. Perhaps inspired by the work of Paul Gauguin and the other artists then working at Pont-Aven, he made several visits to Brittany early in his artistic career, between 1889 and 1900. It was in Brittany that Ott met the printmaker and illustrator Henri Rivière, whose colour woodcuts provided an introduction to the artistic principles of Japonisme. On his return to Paris, Ott exhibited some of his landscapes of Brittany at the Salon des Indépendants of 1901. The following year he contributed a further ten works to the exhibition, and he continued to exhibit there regularly until 1914. Ott’s favourite subjects were scenes of Paris and the banks of the Seine, as well as views of the surrounding Ile de France and sites in Brittany. Although he was first and foremost a landscape artist, Ott also produced still life drawings in pastel, as well as portraits of his wife, children and close friends; works which are more immediate and direct than his delicate landscapes. His palette became somewhat darker as his career progressed. With the outbreak of war in 1914, Ott joined the army, where he made several drawings of his fellow soldiers and scenes of military life. After the end of the war he appears to have given up painting altogether, and until his death produced mainly watercolour views of the countryside around his home in the Parisian suburb of Villeneuve Saint-Georges. In 1929, two years after his death, Ott was the subject of a retrospective exhibition at the Galerie Bernheim-Jeune in Paris. A gifted draughtsman, Lucien Ott worked fluently in a variety of media, including pen, pastel, chalk and watercolour. He was also active as an engraver, trained in this medium by his friend, the printmaker and art historian Loys Delteil. Drawings by Lucien Ott are in the collections of the National Gallery of Art in Washington, D.C., the Morgan Library and Museum in New York, the Ashmolean Museum in Oxford, and elsewhere.