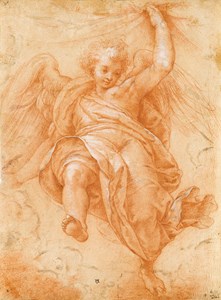 Born in Antwerp, Denys Calvaert was one of the few Flemish artists of the period who worked for most of his career in Italy. After an apprenticeship in the studio of the landscape painter Cerstiaen van Queckborne, Calvaert settled in Bologna sometime around 1561 or 1562, and there completed his artistic training with the painters Prospero Fontana and Lorenzo Sabatini. Both artists were sometime collaborators with Giorgio Vasari, and in 1572 Calvaert accompanied Sabatini to Rome, where they worked under Vasari’s supervision on the fresco decoration of the Sala Regia in the Vatican for Pope Gregory XIII. Calvaert would thus have gained some experience of Tuscan Mannerism early in his career. On his return to Bologna in 1575, he established his own studio, counting among his pupils Guido Reni, Domenichino and Francesco Albani, all of whom later transferred to the Carracci’s rival Accademia degli Incamminati, founded a few years later. He ran a large and busy studio in Bologna, receiving numerous commissions for religious pictures for local churches and smaller devotional works for private patrons. Indeed, Calvaert was to become, alongside the Carracci, one of the leading painters in the city in the last quarter of the 16th century, at the height of the Counter Reformation.