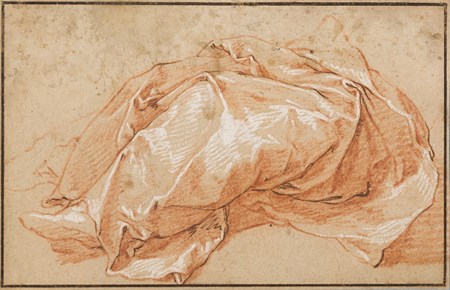 Abraham Bloemaert received his artistic training in Utrecht and Paris but, unlike many of his contemporaries, never travelled to Italy. Indeed, apart from two years in Amsterdam in the early 1590’s, he worked in Utrecht from 1583 until his death. Almost nothing is known of his work before 1590, however, and it is only after his brief stay in Amsterdam that he began to establish a reputation as an artist of note. Together with Cornelis van Haarlem and Joachim Wtewael, Bloemaert came to be one of the last major exponents of the Northern Mannerist tradition. Among his most important religious works are the altarpieces of God with Christ and the Virgin of 1615 in the Sint Janskerk in ’s-Hertogenbosch and an Adoration of the Magi painted in 1624 for the Jesuit church in Brussels and now in Grenoble. Bloemaert enjoyed a very long and productive career of some sixty years, resulting in an oeuvre of around two hundred extant paintings, including landscapes, religious scenes, history subjects and genre scenes. He was a founding member of the painter’s guild of Saint Luke in Utrecht in 1611. As a teacher, Bloemaert’s influence was considerable, with artists such as Jan Both, Cornelis van Poelenburgh, Gerrit van Honthorst, Hendrick Terbrugghen and Jan Baptist Weenix all spending some time in his studio. Bloemaert was a gifted and prolific draughtsman, praised as such by his biographer Karel van Mander, who noted that the artist ‘has a clever way of drawing with a pen, and, by adding small amounts of watercolour, he produces unusual effects’. He produced numerous studies for paintings and engravings - some six hundred prints after his designs are known - as well as several landscape drawings and many sheets of studies of heads, hands and arms. Some of the latter were reproduced as engravings by his son Frederik and published in the 1650’s as the Konstryk Tekenboek, a sort of model-book for students. The Tekenboek proved very popular and was reprinted several times, serving to perpetuate Bloemaert’s influence on later generations of artists. The bulk of Bloemaert’s enormous corpus of drawings appear to have been retained by his descendants for over fifty years, and it is not until the first half of the 18th century that they began to be sold and dispersed.