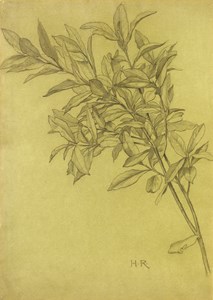 A gifted painter, watercolourist, illustrator, decorator and designer, Henry Ryland studied at the South Kensington Art Schools (later the Royal College of Art) and Heatherley’s School of Art in London, before completing his studies in Paris in the studio of Jean-Joseph Benjamin-Constant, and at the Académie Julian with Gustave Boulanger. Ryland exhibited at the Royal Academy from 1890 onwards, and also showed his work at the Grosvenor Gallery, the New Gallery and the New Watercolour Society, of which he was admitted as a full member. Like his contemporary George Lawrence Bulleid, Ryland’s work was made up primarily of classical subjects in the manner of Lawrence Alma–Tadema or Albert Moore. While he did paint in oils, much of his output took the form of highly finished watercolours, many of which were reproduced in the form of prints, which added to his reputation. He also designed a number of stained-glass panels, and produced woodcut illustrations for magazines, notably the English Illustrated Magazine.