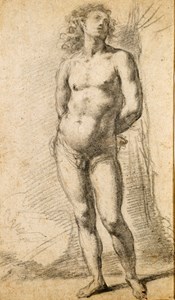 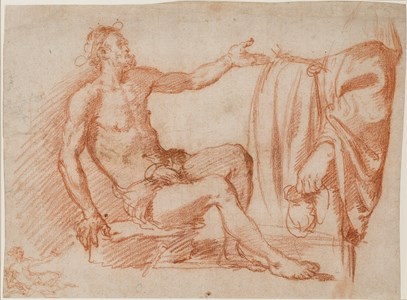 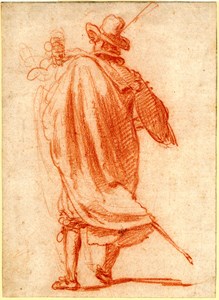 The son and brother of painters, Jacopo Confortini is only rarely mentioned in contemporary sources, and has until recently remained a shadowy figure in the history of Florentine Seicento art. (The 17th century Florentine biographer Filippo Baldinucci, for example, did not include the artist in his Notizie dei professori del disegno da Cimabue in qua.) Confortini was a pupil of Giovanni da San Giovanni, and participated in the decoration of the Casino Mediceo at San Marco between 1621 and 1624 before his admission to the Accademia del Disegno in 1628, at the fairly late age of twenty-six. A year later he completed one of his first independent works, a Madonna of the Rosary with Saints Dominic and Francis for the church of San Michele in the town of Santa Maria a Piazza. Most of Confortini’s surviving paintings are signed and dated, allowing the development of his style to be traced, and for several of these works preparatory drawings are known. In 1631 he completed two of his finest works; the lunette frescoes of The Wedding Feast at Cana and Christ in the House of Simon in the refectory of the Florentine convent of Santa Trinità. (The documents related to this commission refer to the artist as the ‘Frate Confortini’, which would suggest that he had taken religious orders as a monk.) Confortini produced mainly religious works, intended for provincial churches throughout Tuscany. These include an altarpiece for San Egidio at Poggio di Croce, near Perugia, painted in 1640, as well as a Flight into Egypt of 1648 for the Confraternity of the Misericordia in Fiesole and a Glory of the Holy Sacrament, painted for the monastery of San Vincenzo in Prato in 1656. One of his last known works is a Baptism of Christ, dated 1667, in the church of Santo Stefano al Ponte in Florence.Jacopo Confortini is much better known today as a draughtsman than as a painter, although his drawings have only recently been the subject of scholarly study. The artist’s distinctive draughtsmanship was first examined and codified by Christel and Gunther Thiem and Philip Pouncey in their studies of the artist’s work, and it has only been over the past forty years that a small corpus of drawings has been established. Confortini’s extant drawings are all in black or red chalk, and many are preparatory for his paintings. Thus far no pen drawing has been securely attributed to the artist.