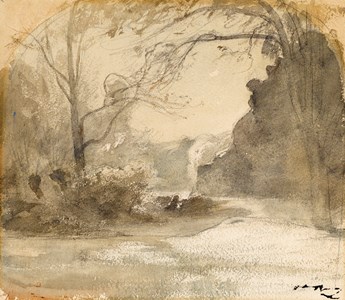 A native of Lyon, Auguste Ravier abandoned his studies as a notary in Paris to train as an artist in the studios of Jules Coigniet and Théodore Caruelle d’Aligny. Early in his career he met Camille Corot, who was to be a lifelong influence on his work. Apart from several trips to Italy between 1840 and 1847, where he painted landscape oil sketches very similar to those of Corot, Ravier worked for his entire career around Lyon and the Dauphiné, taking his subjects from the countryside around the towns of Crémieu and Morestel. He seems to have been something of a recluse, avoiding visits to town and living a life of country solitude. Ravier was particularly adept as a watercolourist, and in the 1850’s and 1860’s worked in a manner indebted to that of Corot and Charles-François Daubigny, both of whom were close friends. He was especially fond of scenes at dawn and dusk, often making studies in oil or watercolour on the spot that would later be worked up into finished watercolours in his studio. As he wrote in one letter, ‘The sky contains everything…Clouds and atmosphere stir my senses. Always something new, something inexhaustible – infinity!’ Indeed, his atmospheric landscapes in watercolour have earned comparisons with those of Turner, whose work he greatly admired. (As he noted in a letter of August 1874 to his friend and biographer Félix Thioller, ‘I believe that I have made some progress in regard to the rendering of light. I want to get at Turner, with whose work I find I have more in common than with anyone else.’) Ravier only rarely exhibited his work, and when he did so it was almost always in Lyon. He hardly ever visited Paris, and it was not until 1884 that several of his watercolours were shown at the Salon. In the same year he lost the sight in one eye, forcing him to give up painting, and by 1889 he had become totally blind.That Ravier was something of a perfectionist in his watercolour technique is seen in another letter to Thioller, written in 1876: ‘For myself I have one pre-occupation: sincerity, the expression of the scene of the moment as felt by my senses as that moment...Without doubt I sometimes get my water-colours too heavy. These I give up; I have to wash them, sponge them, rub them out. It is an effort which has not succeeded; but it is an effort, and it would be more convenient and more easy not to have made it. I try everything, for I have a thirst for the unknown, the madness of research; but that is where my value lies. It is imperfect, but it is not commonplace.’