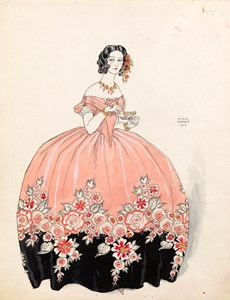 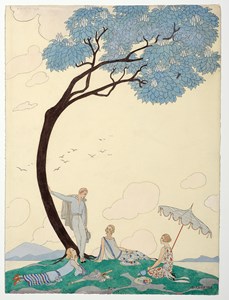 A painter and illustrator, George Barbier studied in Nantes before entering the studio of Jean-Paul Laurens at the Ecole des Beaux-Arts in Paris. He first came to public attention with an exhibition of some ninety drawings at the Galerie Boutet de Monvel in Paris in 1911. Among the leading illustrators of the Art Deco movement, Barbier provided fashion plates for some of the leading couturiers of the period, notably Paul Poiret, Jeanne Lanvin and Madeleine Vionnet. Characterized by a refinement and elegance which epitomized the Art Deco era, much of Barbier’s work took the form of fashion illustrations for such magazines as La Gazette du Bon Ton (for which he also wrote), Modes et manières d’aujourd’hui, Fémina, Costumes parisiens, Vogue and the Journal des dames et des modes. He also produced designs for stage sets and theatre costumes, such as at the Folies Bergère, as well as fabrics, fans and wallpaper. As the scholar and collector Gordon Ray has noted of Barbier, ‘By epitomizing the more refined fantasies of the Parisian world of pleasure during the [1920s], he became the most haunting of Art Deco artists…Recognized as one of the master decorators of the time, he found his services in demand in many fields, but his specialties remained theatrical costumes and settings and above all book decoration…Barbier was a supreme decorative designer, whose art centered on the human figure, displayed in a thousand settings and costumes.’ As well as illustrating his own book Le bonheur du jour, ou les graces à la mode, a study of fashion and manners on which he worked from 1920 and 1924, Barbier drew a large number of book illustrations for works by Théophile Gautier, Paul Verlaine, Pierre Louÿs and Charles Baudelaire, among others. In later years he designed advertisements for Cartier, Renault and other companies. As the novelist and critic Edmond Jaloux noted of the artist, ‘George Barbier is one of the most valuable and most significant artists of our time, so rich in all kinds of talent and original ideas. When our age is past…it will take just a few drawings of Barbier to revive the taste and spirit of our time.’ Barbier died at the age of fifty, at the peak of his career. In recent years, there have been important exhibitions of the artist’s work in Venice in 2008-2009 and Toronto in 2013.