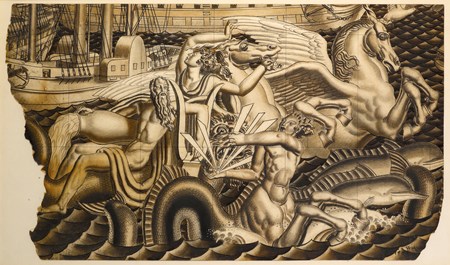 One of the leading artists of the Art Deco period, Jean Théodore Dupas was the son of a merchant marine captain and began his adult life as a merchant seaman. Poor health meant that he had to abandon this career and he enrolled in art school instead, first in his native Bordeaux and later in Paris. He won the Prix de Rome in the category of painting in 1910 and studied at the Académie de France in Rome, from where he sent several paintings to the Paris Salons, although his studies were interrupted by the outbreak of war. Dupas’s work came to public prominence on the occasion of the seminal Exposition des Arts Décoratifs in Paris in 1925. He was chosen by the furniture designer Jacques-Emile Ruhlmann to provide paintings for the latter’s Maison d’un collectionneur, alongside furniture by Ruhlmann and objects by many of the leading Art Deco craftsmen of the day, while other paintings by Dupas were also displayed to great effect elsewhere in the Exposition. In the late 1920’s and 1930’s Dupas won a number of important and prestigious commissions. In 1926 he worked alongside Ruhlmann and the sculptor Alfred Jeanniot on the decoration of the tearoom of the ocean liner Ile-de-France; the first of the grand transatlantic ships to be built in France after the First World War. By this time Dupas had firmly established his reputation. Writing in 1927, his fellow artist George Barbier could already note that ‘Few artists have at such an early age attained such a degree of success, or gathered around them such swarms of imitators and disciples.’Dupas reached the height of his fame in the mid 1930’s, and in 1934 he received his most important commission to date; a series of large glass murals for the Grand Salon of the new French ocean liner, the Normandie. He was also commissioned to provide murals to decorate the Salon de l’Argenterie in the Royal Palace in Bucharest, but the work was only partly completed, and the outbreak of World War II meant that it was never installed. In 1940 Dupas was named curator of the Musée Marmottan in Paris, and the following year was admitted to the Académie des Beaux-Arts and appointed a professor of painting at the Ecole des Beaux-Arts. He ended his career as the Director of the Musée Marmottan.As Edward Lucie-Smith has noted of Dupas and such fellow Art Deco artists as Robert Pougheon and Raphaël Delorme, who were known collectively as the School of Bordeaux, ‘During the 1920s and 1930s their work had a particular appeal to the patrons who were also enthusiasts for the more extreme manifestations of the style in the applied arts…the style they practised, though apparently coherent, has roots in many different places. For example, Dupas and his colleagues can be thought of as the last descendants of early nineteenth-century neo-classicism…Another, quite different, influence upon the Art Deco painting of the Bordeaux School is to be found in Italian Mannerism.’ Dupas was also strongly influenced by contemporary sculpture, and in particular that of Antoine-Emile Bourdelle and, as Lucie-Smith points out, ‘A number of monochrome works by Dupas have the air of being either designs for, or imitations of, relief sculpture.’