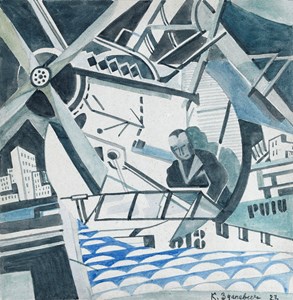 Born in the city of Tiflis (now Tbilisi), the capital of Georgia, Kirill Mikhailovich Zdanevich was devoted to drawing from an early age. (When he was ten years old, his mother noted in her diary that ‘Kira can never wait to finish dinner for fear he’ll be late for drawing class. There’s no doubt that he’s developing a deep love of drawing, a growing aesthetic sense, and I feel sure that soon his burgeoning love of art will burst into flower…’) Zdanevich entered the Imperial Academy of Fine Arts in St. Petersburg in 1911, studying there for two years. The following year he met and became friendly with Mikhail Larionov and Natalia Goncharova, and sent three paintings to Moscow to be exhibited with the Oslinyy Khvost (Donkey’s Tail) group; an association of Russian artists led by Larionov and Goncharova. In 1913 Zdanevich went to Paris, where he visited the studios of Picasso and Matisse and befriended the expatriate Russian painter Serge Charchoune. Returning to Russia in 1914, Zdanevich participated in another exhibition organized by Larionov and Goncharova in Moscow, entitled No.4, where he showed seven paintings and fifteen drawings. With the outbreak of war in 1914, Zdanevich served as an officer in the Russian army on the East Prussian front. He was wounded several times, and in 1917 was discharged and settled in Tiflis. In October of that year he organized a large retrospective exhibition of his work in Tiflis and at the same time, together with his younger brother Ilya and the writers Aleksandr Kruchenykh and Igor Terentyev, founded the Futurist group 41°, dedicated to the advancement of avant-garde poetry. Working in close collaboration with Ilya, a noted writer and engraver, Zdanevich created designs for some of the finest Futurist books of the period, such as the Treatise on Total Indecency, written by Terentyev and published in Tiflis in 1920. During this period Zdanevich, who had signed the Rayonist and Futurist manifestos, painted a series of small watercolours but few oil paintings. His Cubo-Futurist style was characterized by a strong sense of colour; as Charchoune said of him, ‘He brought us colour, which the Cubists had virtually abandoned.’ In 1922 he applied for a visa to go to America, but was unsuccessful, and was also unable to obtain permission to visit France, where Ilya was living. The 1920’s found Zdanevich worked primarily as a designer of stage sets and as a book illustrator, dividing his time between Tiflis and Moscow. Following the Second World War, he was deported to a work camp for about ten years. In the late 1950’s and 1960’s Zdanevich wrote several books and articles on Georgian art and artists. After repeatedly applying for a visa to visit France, he was finally able to do so in 1966, when he was reunited with his brother. Zdanevich died three years later, in Georgia.