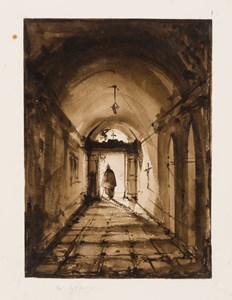 Trained in the studio of Jean-Antoine Constantin, François-Marius Granet was from his youth recognized as a gifted draughtsman. His early sketchbooks, preserved in the Musée Granet in Aix, already show an interest in architectural ruins and church interiors; motifs to which he would remain devoted throughout his career. After studying briefly in the studio of Jacques-Louis David in Paris - where his simple brown attire and ascetic personality led his fellow pupils to give him the nickname ‘the Monk’ - he eventually resolved to return to the South. Before his departure, however, he submitted a painting to the Salon of 1799, depicting the cloister of a church on the rue St. Honoré. This painting, greatly admired at the exhibition, marked the beginning of Granet’s successful career. In 1802 Granet traveled to Rome, remaining there for most of the next twenty-two years. He set up his studio in an abandoned monastery and working extensively in the city and the surrounding Campagna. Although never a pensionnaire at the Académie de France, he was able to make a reasonable living selling views of Rome to the many French tourists who visited the city during the Napoleonic occupation. At the Salon of 1819 he exhibited a painting of The Choir of the Capuchin Church in Rome, widely praised by critics, which firmly established his reputation in France. The painting was coveted by King Louis XVIII, although eventually purchased by Caroline Murat, Queen of Naples. Returning to France in 1824, Granet was appointed to a position as a curator at the Louvre in 1826, and was later given the task of establishing a Museum of French History at Versailles by Louis-Philippe. From then on, he seems to have been less active as a painter, although he continued to draw, and his stay in Versailles saw him produce a series of charming watercolours of the gardens. After Granet’s death, some two hundred of his drawings and watercolours were presented to the Louvre. The remainder of his studio, numbering around three hundred paintings and some 1,500 drawings, were left to his native city of Aix; a bequest that forms the nucleus of the Musée Granet there.Granet’s work is characterized by an appreciation for and understanding of the effects of light, and he delighted in achieving atmospheric effects in his drawings and watercolours. The freshness and immediacy of his watercolours show him to be the equal of such contemporary masters of the medium as William Callow, Thomas Shotter Boys and Richard Parkes Bonington, all of whom were active in Paris in the 1820’s and 1830’s.