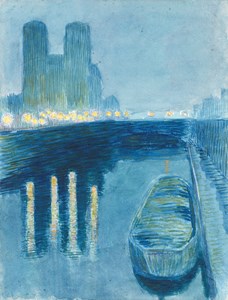 After beginning his studies as a doctor in Nancy, Paul-Émile Colin moved to Paris to complete his education in 1887. His interest in drawing led him also to enroll at the Atelier Colarossi, where he met and befriended the artist Charles Filiger, though on the whole Colin seems to have been largely self-taught. In the summer of 1890 he travelled with Filiger to Le Pouldu in Brittany, where they met Paul Gauguin, Jacob Meyer de Haan and Paul Sérusier, and where both Filiger and Colin contributed to the decoration of the dining room of La Buvette de la Plage, the inn owned by Marie Henry where the artists stayed. Colin soon embarked on a secondary career as a printmaker, working primarily in the medium of wood engraving. His first prints - strongly influenced by the graphic manner of Gauguin, Félix Vallotton and Henri Rivière - were produced in 1893, and his early work continued to show the influence of the Pont-Aven and Nabis schools throughout the decade. Living in Lagny-sur-Marne in the eastern suburbs of Paris, Colin carried on practicing medicine until 1901, when he decided to devote himself fully to printmaking and book illustration. He illustrated several books, including editions of works by Anatole France, Emile Zola, Jules Renard, Rudyard Kipling and Maurice Barrès, and also worked in lithography, watercolour, pastel and, from around 1920 onwards, as a painter in oils. Apart from visits to Italy in the 1920’s and to Spain, Portugal and Morocco in the early 1930’s, Colin worked mainly in the Parisian suburb of Bourg-la-Reine, where he had settled in 1911. During the Second World War he worked as a doctor with the Red Cross. A member of the Société Nationale des Beaux-Arts, Colin was also a founder member of the Société de la Gravure sur Bois Originale, established in 1911, and was eventually elected vice-president of the group. In the 1920’s, retinal problems associated with the artist’s severe myopia led to his giving up wood engraving, for which precise vision was a prerequisite, in favour of painting and drawing.