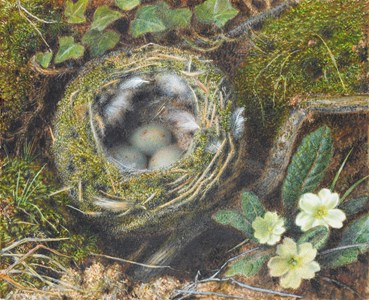 One of the few known pupils of William Henry Hunt, from whom he adopted a lifelong interest in the depiction of bird’s nests as a still life subject, John Sherrin began exhibiting at the Royal Academy in 1859. He eventually exhibited some forty works at the R.A., up to 1894, as well as a further 150 drawings at the New Water-Colour Society, which he joined as an associate member in 1866. He became a member of the Royal institute in 1879. As an artist, Sherrin worked mainly in watercolour and specialized in still life and bird subjects. He became a member of the Royal Institute in 1879, and his works are today in the collections of the Victoria and Albert Museum and the British Museum in London, the Manchester City Art Gallery, the Aberdeen Art Gallery, the Ulster Museum, and elsewhere.