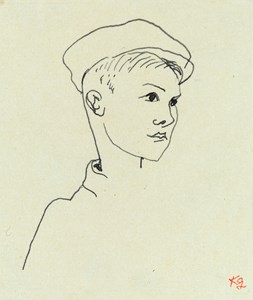 One of the most significant Swiss sculptors of the 20th century, Karl Geiser received his training in Berne, Munich and Berlin and, apart from brief visits to Paris, Rome and Genoa, worked mainly in Zurich. He enjoyed a successful career, and among his important patrons was the Winterthur collector Georg Reinhardt. As a sculptor, draughtsman and printmaker, Geiser’s subject matter was often inspired by children. As one contemporary writer noted, ‘The themes of this sculptor are characteristic. Geiser draws, above all, the adolescent. The body of the prepubescent youth, the man-child, all of whose proportions escape any fixed rules, is the dominant element of his art.’ Geiser received a number of public sculptural commissions in Zurich, Berne and Winterthur, notably two sculptural groups of boys and girls for a new school in Berne, completed in 1937 and installed in 1938. As well as working as a draughtsman and printmaker, Geiser was also a passionate photographer. In 1941 an exhibition of 350 of his drawings was held at the Kunsthaus in Zurich, the same year that a large exhibition of his sculptures was mounted at the Kunstmuseum in Winterthur. Geiser suffered from depression throughout his life and died in his studio in 1957, apparently a suicide.