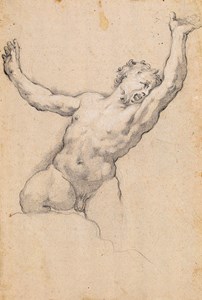 Nicknamed Il Clementone, apparently because of his large size, Clemente Bocciardo was trained in the studio of Bernardo Strozzi in Genoa. On the evidence of a signed painting of the Madonna and Child in Glory with Saints, dated 1623 and today in the Museo di Castelvecchio in Verona, the influence of Strozzi was apparent in Bocciardo’s earliest independent works. According to his biographers Raffaele Soprani and C. G. Ratti, Bocciardo joined Giovanni Benedetto Castiglione in Rome in the early 1630’s. After a few years of working in Rome, he returned to Genoa where, as Soprani and Ratti note, he painted ‘vari quadri di storie, e di capricci con si bella invenzione’. Among the handful of recorded works of this period in Genoa are a Last Supper painted for the Oratory of the Confraternity of San Germano and a Corpus Domini for the church of Sant’Andrea. Bocciardo also established an Accademia del Nudo, or school of life drawing, in his Genoese studio, where among the teachers was the painter Gioacchino Asseretto. Much of the second half of Bocciardo’s career was spent in Tuscany. He worked for some time in Florence before settling around 1639 in Pisa, where he remained until his death in 1658. One of Bocciardo’s first works in Pisa was a canvas of Saint John the Baptist, dated 1639, painted for the church of Santa Croce in Fossabanda and today in the Palazzo della Prefettura in Pisa. Other significant works in Pisa include paintings of the Martyrdom of Saint Sebastian in the Certosa and The Virgin Appearing to Saint Charles Borromeo in the Duomo, as well as an Intercession of the Virgin in the church of San Matteo and a Madonna of the Rosary, completed in 1655 for a Pisan confraternity and today housed in the church of San Salvatore. Bocciardo also painted several easel pictures of both religious and secular subjects for private patrons, and produced a number of commissioned portraits.