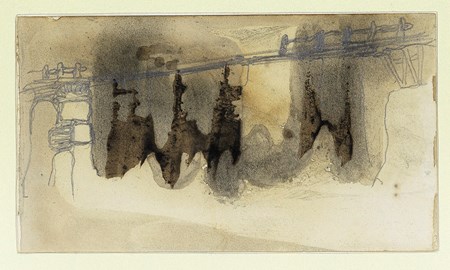 The preeminent literary figure in 19th century France, Victor Hugo was also an accomplished and prolific draughtsman. He produced nearly three thousand drawings, the principal groups of which are today in the collections of the Bibliothèque Nationale and the Maison de Victor Hugo in Paris. He began to draw seriously around 1825, but relatively little of this early work survives and it was not until some twenty years later that he was to develop his distinctive personal idiom. Hugo seems to have been most productive as a draughtsman during periods when he was writing less, as for example in 1850. Conversely, there are very few drawings from the period between 1852 and 1853, when he was engaged on a spell of intense literary activity. His drawings achieved a height of expression during the years of his political exile from France on the Channel Islands of Jersey, where he and his family lived from 1852 to 1855, and Guernsey, where he settled in 1855 and remained until 1870. Although he often gave drawings as presents to friends and colleagues, and allowed several sheets to be reproduced as engravings, the act of drawing for Hugo remained a largely private occupation. In the last ten years of his life, he drew much less, a decline mirrored in his literary output. As a draughtsman, Hugo relied primarily on brown or black ink and wash, applied with a fluidity and transparency that allowed for remarkable tonal and atmospheric effects. His idiosyncratic working methods have been described by his son Charles Hugo: ‘Once paper, pen and ink-well have been brought to the table, Victor Hugo sits down and without making a preliminary sketch, without any apparent preconception, sets about drawing with an extraordinarily sure hand not the landscape as a whole but any old detail. He will begin his forest with the branch of a tree, his town with a gable, his gable with a weather vane, and, little by little, the entire composition will emerge from the blank paper with the precision and clarity of a photographic negative subjected to the chemical preparation that brings out the picture. That done, the draftsman will ask for a cup and will finish off his landscape with a light shower of black coffee. The result is an unexpected and powerful drawing that is often strange, always personal, and recalls the etchings of Rembrandt and Piranesi.’ Hugo also experimented with different techniques and media, including inkblots (taches), folded paper, stencilled cut-outs, gold leaf and impressions taken from various objects, including leaves and lace.