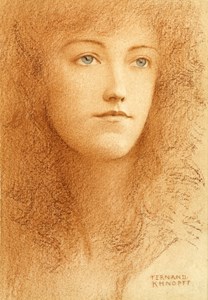 The foremost Belgian Symbolist painter, and arguably the only one to achieve an international reputation, Fernand-Edmond Khnopff enrolled as a law student at the University of Brussels in 1875. However, inspired by art lessons in the studio of the painter Xavier Mellery, he abandoned his university career and entered the Académie Royale des Beaux-Arts in Brussels, where his fellow students included James Ensor and Jean Delville. At the Paris Exposition Universelle of 1878 he came across the work of Gustave Moreau and Edward Burne-Jones, both of whom were to be particular influences on his own style. Khnopff continued his training in Paris, where he attended classes at the Académie Julian. Like Moreau, Khnopff was drawn to Symbolism in his work as a painter and draughtsman. He first exhibited with the L’Essor circle of artists in Brussels in 1881, and two years later was a founder member of Les XX, a group of avant-garde artists, writers and musicians. Khnopff soon achieved considerable success as an artist, producing commissioned portraits, decorative panels and book illustrations, as well as finished watercolours, pastels and ink drawings, often imbued with a deeper literary or metaphysical meaning. His favourite model was his younger sister Marguerite, with whom he seems to have been in love, and whose features appear in countless paintings and drawings. Championed by the poet and critic Emile Verhaeren, Khnopff earned a measure of success in France, exhibiting for the first time at the Paris Salon in 1884 and in 1892 at the first Salon de la Rose + Croix. The 1890’s saw the artist at the height of his success, both in Belgium and elsewhere in Europe. He continued to exhibit regularly in Brussels, both with Les XX and with its successor La Libre Esthétique, formed in 1893. Khnopff also showed his work at the Munich Secession from 1894 onwards, and enjoyed a popular and successful exhibition at the Vienna Secession in 1898. From 1900 onwards he devoted his energies to the construction of a large house and studio in Brussels, where he worked in increasing isolation. He continued to write essays and reviews, and also began designing costumes and sets for the Théâtre Royal de la Monnaie in Brussels. Khnopff was admitted to the Académie Royale des Beaux-Arts in Brussels in 1907, but his output declined significantly after the First World War.