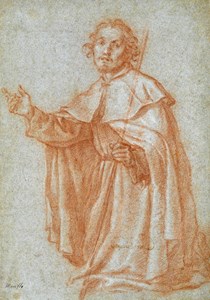 A pupil of Giambattista Naldini, Francesco Curradi entered the Accademia del Disegno in Florence in 1590, at the age of twenty. An accomplished draughtsman, one of his earliest projects was a series of eighty-seven red chalk drawings illustrating the life of the future saint Maria Maddalena de’ Pazzi, executed in 1606 and today preserved in an album in the Carmelite convent at Careggi, for which the artist also painted a number of canvases. Together with Domenico Passignano, Matteo Rosselli and Jacopo da Empoli, Curradi was soon established as one of the leading painters in Florence in the first quarter of the 17th century, painting numerous altarpieces for churches in the city and elsewhere in Tuscany. Together with many other local artists, he participated in the decoration of Casa Buonarroti between 1616 and 1617. He received a number of important commissions from the Medici, including paintings for the Casino Mediceo di San Marco in 1622, and also worked at the Medici villa at Poggio a Caiano between 1624 and 1632, painting a series of lunettes of scenes from the life of Saint Mary Magdalene. Summoned to Rome, he painted a Saint Maria Maddalena de’ Pazzi Receiving a Veil from the Virgin for the church of San Giovanni dei Fiorentini. Among his most significant commissions was a Last Judgment for the Servite convent of Montesenario, near Florence. A deeply devout man, Curradi was made a Knight of Malta by Pope Urban VIII in 1627, and lived to the age of ninety-two. As a draughtsman, Francesco Curradi had a preference for black chalk (and, less frequently, red chalk), often combined with extensive areas of white heightening, on blue, brown or grey paper. His drawings are also characterized by a soft handling of the chalk medium and a distinctive luminosity. A very large group of drawings by the artist, numbering over six hundred sheets, is in the collection of the Istituto Nazionale per la Grafica in Rome, while some 175 drawings are in the Uffizi, and a smaller but equally significant ensemble is in the Louvre.