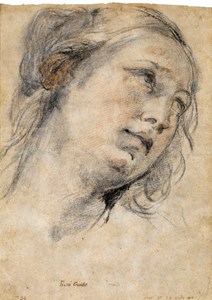 Guido Reni was a pupil of Denys Calvaert in Bologna and, like Domenichino and Francesco Albani, transferred in 1595 from the studio of the Flemish artist to the Carracci’s Accademia degli Incamminati. His earliest major work, a Coronation of the Virgin painted in c.1595 and now in the Pinacoteca Nazionale in Bologna, shows the influence of both Calvaert and the Carracci. A number of altarpiece commissions for churches in and around Bologna followed before Reni moved to Rome in 1601. He remained there for some thirteen years and received several important commissions; unlike Albani and Domenichino, however, he did not join the Roman workshop of Annibale Carracci. Among Reni’s most important Roman works were the decoration of the chapel of the Annunciation in the Palazzo Quirinale, painted in 1610, and the ceiling fresco of the Triumph of Aurora for the Villa Borghese, completed in 1614. Reni returned to Bologna that year and after the death of Ludovico Carracci in 1619 was established as the city’s leading painter. He remained the dominant figure in local artistic circles for the next three decades, enjoying the patronage of collectors and connoisseurs not only in Italy but also in Spain and France. Among the important works of this period are four large scenes from the legend of Hercules painted between 1617 and 1621 for Ferdinando Gonzaga, Duke of Mantua; these are now in the Louvre. In the late years of his career his painting style became looser and broader, with figures of a somewhat ethereal quality painted with silvery tones.Unlike many of his contemporaries, Reni does not seem to have made much effort to preserve his drawings. The biographer Cesare Malvasia noted of the artist that ‘Of his drawings he kept no account, letting them lie all over the room for everyone. Although they all handled them, because of a certain sense of respect there were few who dared to steal them…He brought out bundles of drawings for any stranger who turned up and asked about them’2, and adds that at Reni’s death large groups of drawings and sketches were sold for minimal sums. As Ann Sutherland Harris has written, ‘Modern collectors and curators of drawings at major museums anxious to possess one of Reni’s splendid chalk studies of drapery or a handsome head gazing at the sky are well aware of the difficulty of acquiring examples of these studies now, yet after the artist’s death, according to Malvasia, Reni’s drawings were virtually given away in bundles.’3 Although the inventory of the contents of Reni’s studio after his death lists more than nine hundred drawings, less than a third of these survive today, of which the largest group - numbering around fifty sheets - is in the Royal Collection at Windsor Castle.