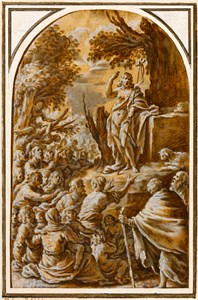 Following a period of training in the studio of Felice Brusasorci in Verona, where he studied alongside other local painters such as Alessandro Turchi and Pasquale Ottino, Marcantonio Bassetti was in Venice by about 1605. There he met the Venetian painter Palma Giovane, with whom he may have worked as an assistant, and who certainly had a profound influence on his draughtsmanship. Around 1616 Bassetti travelled to Rome, where he worked with Carlo Saraceni and became strongly influenced by the Caravaggism of Saraceni and Orazio Borgianni. He became a member of the Roman Accademia di San Luca, and between 1616 and 1617 participated in the decoration of the Sala Regia in the Palazzo Quirinale. While in Rome, Bassetti painted a Martyrdom of Saints Vito, Fermo and Rustico for the Augustinian church in Munich, followed a few years later by an altarpiece of Five Bishop Martyrs for the Veronese church of Santo Stefano. By 1620 he had returned to his native Verona, where he earned commissions for several altarpieces for local churches. He also worked on a series of portraits, most of which are today in the Museo del Castelvecchio in Verona. Bassetti died during the plague of 1630, at the age of around forty-four.