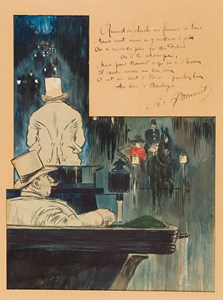 A native of Lausanne, Théophile-Alexandre Steinlen began his artistic career as a designer of printed fabrics. In 1881 he moved to Paris, settling in Montmartre, and there began to frequent the literary cabaret known as Le Chat Noir, founded by a fellow Swiss expatriate, Rodolphe Salis. It was at Le Chat Noir that Steinlen met and befriended writers such as Paul Verlaine and the artists Jean-Louis Forain, Henri de Toulouse-Lautrec, Louis Anquetin, Henry Somm, Adolphe Willette, Félix Valotton and Emmanuel Poiré, known as Caran d’Ache, among others. The artists of Le Chat Noir established something of a private club or society of aesthetes, and Steinlen was soon contributing illustrations to the associated journal Le Chat Noir. The success of these set him on the road to becoming one of the foremost illustrators in Paris at the turn of the century. At times using the pseudonym ‘Jean Caillou’, Steinlen submitted drawings to other satirical publications, including Le Mirliton and, from 1891 onwards, Gil Blas illustré, for whom he made over four hundred drawings. It was the success of his work for Gil Blas illustré that established Steinlen’s reputation outside France. Among the more than thirty magazines to which he also contributed were Le Croquis, Le Rire, Cocorico, La Revue Illustrée, L’Assiette au Beurre and Le Canard Sauvage. In 1901 he became a naturalized French citizen. Steinlen depicted all manner of Parisian society in his drawings and illustrations, with a particular emphasis on the life of the working class. Like his contemporaries Toulouse-Lautrec and Alphonse Mucha, he was also active as a designer of theatrical and cabaret posters; an important means of disseminating his work and one that greatly added to his popularity. A close friend and collaborator of the singer and songwriter Aristide Bruant, Steinlen provided illustrations for sheet music covers, and also illustrated a number of books, including Guy de Maupassant’s La Vagabond and Anatole France’s L’Affaire Crainquebille. He enjoyed the first of many successful exhibitions of paintings and drawings in 1894, and in 1909 gained the distinction of a room devoted solely to his work at the Salon d’Automne. As a draughtsman, Steinlen employed a wide variety of media, including black, blue and coloured chalks, ink, pencil, watercolour and charcoal. A large group of drawings by the artist, numbering nearly 2,800 sheets, is today in the collection of the Louvre.