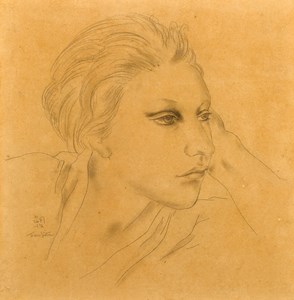 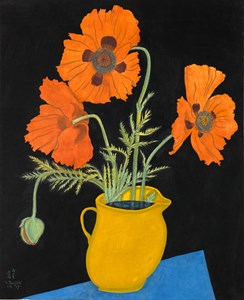 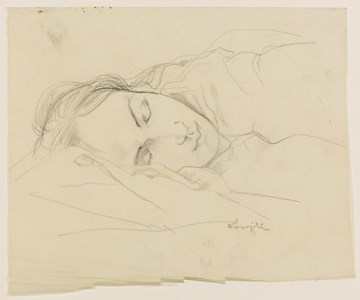 A painter, draughtsman and printmaker, Tsuguharu Foujita studied at the School of Fine Arts in his native Tokyo. Disappointed by the conservative nature of the training he received there, he decided to move to Paris, where he arrived in 1913. Foujita soon made his mark in the artistic milieu of bohemian Paris, becoming friendly with such artists as Pablo Picasso, Henri Matisse, Amedeo Modigliani, Chaim Soutine and Juan Gris. From quite early in his career he achieved considerable financial rewards from the sale of his paintings. (Indeed, such was his success that he was able to install a bathtub with hot running water in his studio in Montparnasse; a great luxury that was used by many of the artist’s models in the area, most notably Man Ray’s lover Kiki, who also posed nude for Foujita.) Although he was associated with the artists of the School of Paris, and in 1920 became a permanent member of the Salon d’Automne, Foujita created his own individual style, characterized by a combination of Japanese, French and European influences. Foujita’s favourite subjects included portraits, views of Paris, still-lives, nudes and cats, and he also designed a number of posters. In later years his fame spread beyond France, and in 1931 he undertook a hugely successful tour of Central and South America, while two years later he was welcomed back to Japan as something of a celebrity. He remained in Japan during the Second World War, working as an official propaganda and war artist for the Army and Navy Ministries, for which he was much criticized by his countrymen after the war. Foujita returned to settle for good in France in 1950, and became a French citizen in 1955. Following his conversion to Catholicism in 1959 (when he adopted the baptismal name Léonard, in honour of Leonardo da Vinci), he began producing paintings of religious subjects, culminating in the decoration of the chapel of Notre-Dame-de-la-Paix in Reims with murals and stained glass, completed in 1966. A large collection of Foujita’s work is today in the Musée des Beaux-Arts in Reims.