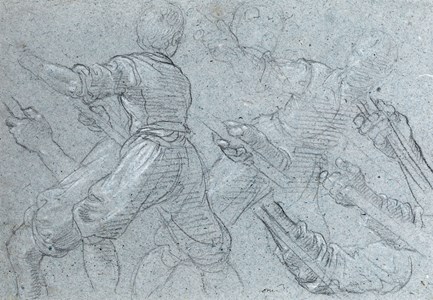 The half-brother of the painter Orazio Gentileschi, Aurelio Lomi was a pupil of Ludovico Cigoli and Alessandro Allori in Florence and worked mainly in Tuscany and Liguria. Admitted into the Accademia del Disegno in Florence in 1578, he spent the early years of his independent career in Rome, where among his chief works were the vault frescoes of the Assunta chapel of Santa Maria in Vallicella, painted between 1587 and 1588. Lomi painted numerous altarpieces for churches in his native Pisa, including San Silvestro, San Martino, Santa Maria del Carmine and San Frediano, as well as several works for the Duomo. He also painted religious works for such Florentine churches as Santo Spirito, San Lorenzo, Santissima Annunziata and the Chiesa del Carmine, as well as churches in Bologna, Lucca and Pistoia. Lomi worked in Genoa between 1597 and 1604, and altarpieces by him are today to be found in Santa Maria in Castello, San Siro, Santa Anna, Santa Maria Maddalena and other churches in the city and elsewhere in Liguria. Among the handful of paintings by Lomi outside Italy is a canvas of Christ Washing the Feet of Saint Peter in the Fogg Art Museum in Cambridge, Massachusetts.