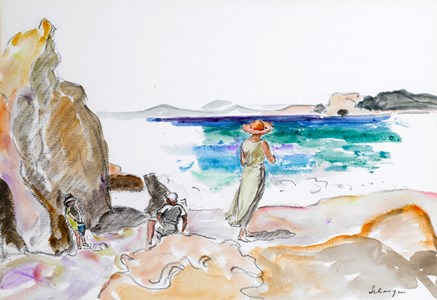 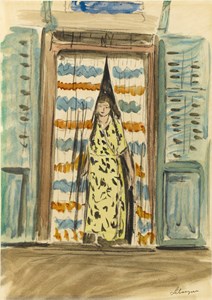 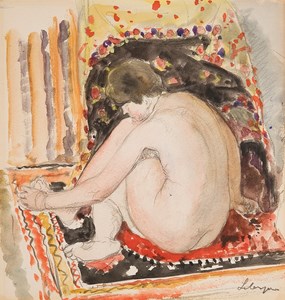 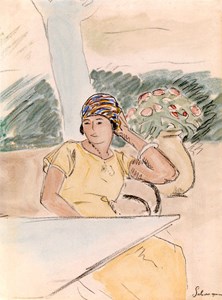 Henri-Joseph Lebasque arrived in Paris in 1885 to study with Léon Bonnat at the Ecole des Beaux-Arts, although according to his biographer Paul Vitry he also received some training from Camille Pissarro. He also met and was influenced by the painters Edouard Vuillard and Pierre Bonnard, leaders of the group of artists known as the Nabis. Lebasque exhibited for the first time in a group show at the gallery of the dealer Louis Le Barc de Boutteville in 1892, and the following year made his debut at the Salon des Indépendants. He exhibited regularly at the annual Salons, where his works were admired by critics, and also took part in the inaugural Salon d’Automne in 1903. Lebasque enjoyed a longstanding friendship with Henri Matisse, whom he probably met at the Salon d’Automne in 1905, and had his first one-man exhibition at the Galerie Georges Petit in 1907. He also worked as a decorator, painting mural decorations for private homes and for such public spaces as the Salon des Dames of the Théâtre des Champs-Elysées in Paris. He provided designs for ceramics, commissioned by the dealer Ambroise Vollard, which were made by the potter André Metthey. Lebasque spent the later years of the First World War working as a war artist, and after the war spent much of his time painting in the south of France. In 1918 Lebasque entered into an exclusive contract with the Galerie Georges Petit, through whom his paintings were exhibited and sold in America. In 1923 he was one of the founding exhibitors at the newly established Salon des Tuileries, and the following year left Paris for good to settle at Le Cannet, near Cannes.An accomplished watercolourist, Lebasque worked frequently in the medium. As a recent scholar has noted, ‘Henri Lebasque’s watercolors have a purity of color and line, and yet a lyrical feeling to them as well...while many derive their charm from their elusive, unfinished nature, with figures melting or floating under the Riviera sun, the majority of Lebasque’s watercolors are polished examples of his mastery of the medium...Lebasque’s exceptional draughtsmanship enhances the simplicity of [his] compositions, which are clean-lined, with few colors and mesmerizing intense hues.....[He] captures the intensity of colors as he saw them; the seeping purples of afternoon skies, and the radiant azure of midday oceans filling these watercolor paintings with color that remains strong.’