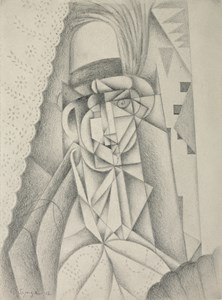 Trained in the Académie des Beaux-Arts in Nantes, Jean Metzinger sent three paintings to the Salon des Indépendants in 1903 and, having sold them, soon thereafter settled in Paris. His early work was in a Neo-Impressionist style, and in 1904 he exhibited in a group show at the Galerie Berthe Weill and also at the Salon d’Automne. Friendly with the painter Robert Delaunay, he also met the poets Max Jacob and Guillaume Apollinaire and, through them, Pablo Picasso. In 1910 Metzinger published an article on ‘Cubist’ artists in the German magazine Pan, linking the work of the painters Picasso, Delaunay, Georges Braque and Henri Le Fauconnier. At the Salon des Indépendants of 1911 the work of Metzinger, Gleizes, Delaunay, Le Fauconnier and Fernand Leger was exhibited in a separate room, in what was one of the first public manifestations of the nascent movement that would come to be known as Cubism. In one review of the exhibition, by the critic André Salmon, Metzinger was sardonically described as ‘le jeune prince du Cubisme’. Metzinger’s Cubist style continued to develop independently in the years leading up to the outbreak of the First World War, and in 1912 he published, together with Gleizes, the treatise Du Cubisme, the earliest significant critical account of the movement. In the same year he also took part in the Salon de La Section d’Or, the first large exhibition of Cubist work. By the following year Metzinger was being described by Apollinaire, in his book Les peintres cubistes, as the third most significant Cubist artist, after Picasso and Braque. During the war Metzinger served in the ambulance corps, and on his discharge in 1916 began working under contract for the dealer Léonce Rosenberg, producing paintings characterized by a sombre palette of browns, blacks, greens and blues. He also befriended a number of other artists associated with the Cubist movement, including Juan Gris and Jacques Lipchitz. Metzinger continued to exhibit at Rosenberg’s Parisian gallery L’Effort Moderne throughout the 1920’s, alongside other Cubist artists, and by the second half of the decade was working with brighter colours and less fragmented forms. After the Second World War, however, the paintings he produced were largely pastiches of his earlier, seminal Cubist style of the second and third decades of the century.