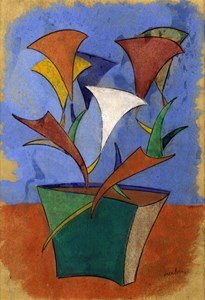 Auguste Herbin studied at the Ecole des Beaux-Arts in Lille between 1898 and 1901, when he moved to Paris. His earliest paintings were of landscapes and still life subjects, executed in a fairly typical Post-Impressionist manner, several of which were exhibited at the Salon des Indépendants from 1906 onwards. In 1909, however, Herbin moved to a studio in the building known as the Bateau-Lavoir in Montmartre, where he came into contact with the community of artists and writers living and working there, including Picasso, Georges Braque and Juan Gris. Herbin’s paintings were exhibited with those of Fernand Léger, Jean Metzinger and Albert Gleizes at the Salon des Indépendants of 1910, and two years later he took part in the second exhibition of the Section d’Or group, alongside other artists involved in the development of Cubism, including Metzinger, Gleizes, Léger and Jacques Villon. Herbin produced his first abstract paintings in 1917. His work was promoted by the dealer Léonce Rosenberg, who exhibited the artist’s paintings and relief sculptures at his Galerie de l’Effort Moderne in 1918 and 1921. In 1931 Herbin was one of the founders of the Abstraction-Création group, together with Georges Vantongerloo, Jean Hélion, František Kupka and Theo van Doesburg. Herbin’s continuing devotion to the principles of pure abstract art and colour theories meant that his work was influential on a younger generation of artists, as was the publication of his book L’art non-figuratif non-objectif, which appeared in 1949. The book outlined the artist’s theories concerning the relationship of colours, forms, musical notes and the alphabet. In the 1950’s Herbin established the Salon des Réalites Nouvelles, and in his late years designed a number of tapestries.