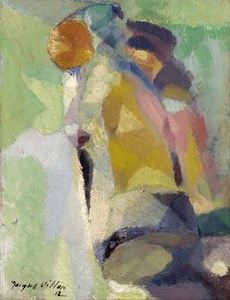 Born Gaston Emile Duchamp, Jacques Villon adopted his name to distinguish himself from his younger brothers, the sculptor Raymond Duchamp-Villon and the painter Marcel Duchamp, as well as his sister Suzanne Duchamp, who was also a painter. Villon arrived in Paris in 1895 and soon met Henri de Toulouse-Lautrec, who was to be a particular influence on Villon’s early work as an illustrator. He also took up the practice of colour etching, creating a number of fine prints of Belle Epoque subjects around the turn of the century. Villon’s early career was devoted to engraving and commercial illustration, and it was not until around 1910, at the age of thirty-five, that he began working full time as a painter. In 1911 he was a founder member of Puteaux Group – better known as the Section d’Or, a name Villon came up with - along with his brothers and the artists Albert Gleizes, Jean Metzinger, Juan Gris, Fernand Leger, Robert Delaunay, Frantisek Kupka and Francis Picabia, among others. In 1912 Villon exhibited with the Section d’Or, and the following year nine of his paintings were included in the seminal Armory Show in New York, all of which were sold. He also produced a number of significant prints in the Cubist idiom. After the First World War, Villon’s work began moving towards a form of geometric abstraction. Villon was one of the few French artists of the period to achieve a measure of success in America, where his work had been shown at the 1913 Armory Show in New York and was acquired by such important collectors as John Quinn. In 1921 he had his first one-man show in America; indeed within a few years his work was better known in America than in France. By the early 1930’s Villon had begun exhibiting with the Abstraction-Création group, and in 1938 met the art dealer Louis Carré, who was to become his exclusive agent. In 1942 the contents of Villon’s studio were acquired en bloc by Carré, who proceeded to establish the artist’s reputation in France. A one-man exhibition at Carré’s Galerie de France in 1944 secured the artist’s renown among younger artists. In 1956 Villon won the Grand Prize for painting at the Venice Biennale, and his international reputation was firmly established by an important retrospective exhibition of his work at the Galerie Charpentier in Paris in 1961.