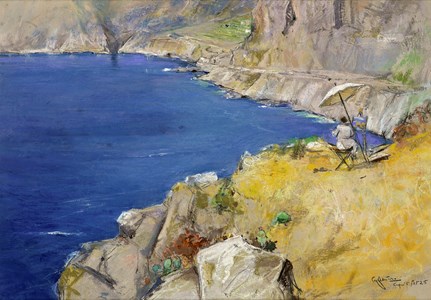 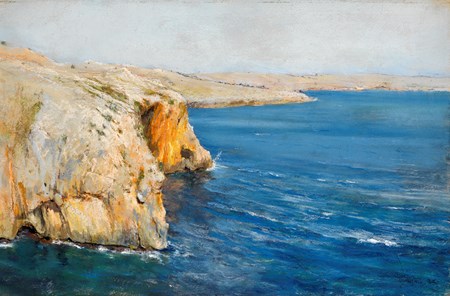 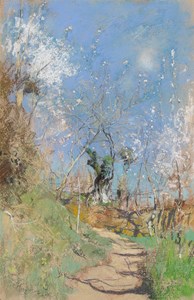 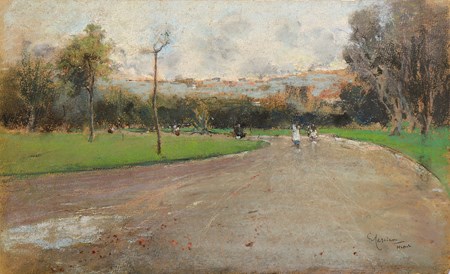 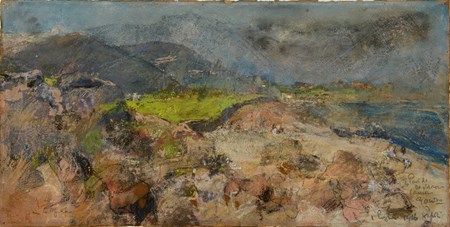 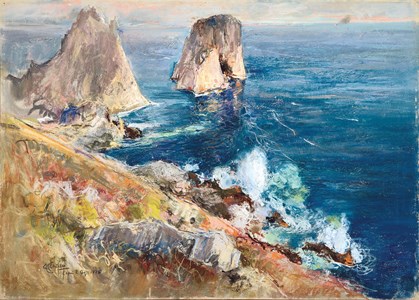 Born in the province of Lecce, Giuseppe Casciaro enjoyed a long and successful career of some sixty years. He was a pupil of Filippo Palizzi, Gioacchino Toma, Stanislao Lista and Domenico Morelli at the Accademia di Belle Arti in Naples, where he won numerous prizes. Casciaro developed a particular proficiency for landscape drawings in pastel, although he also painted a handful of oil paintings. He may have first been inspired to take up the medium of pastel in 1885, when a series of pastel drawings by the artist Francesco Paolo Michetti was shown in Naples. Two years later, in 1887, Casciaro exhibited a series of eleven pastel landscapes of his own, and he remained devoted to the medium throughout his career. Indeed, he may be regarded as one of the finest practitioners of the art of the pastel landscape working in Italy during this period. Casciaro settled on the hillside quarter of Naples known as the Vomero, sharing a studio with the painter Attilio Pratella, and for much of his life his preferred subject matter were views in and around Naples and the islands of Capri and Ischia. Between 1892 and 1896 Casciaro travelled regularly to Paris, where he had a one-man exhibition and received commissions from the dealer Adolphe Goupil. Appointed a professor at the Accademia in Naples in 1902, by 1906 he was also engaged as a tutor in pastel drawing to the Queen of Italy, Elena di Savoia. Casciaro exhibited frequently in Naples and at the Biennale in Venice, and won a bronze medal at the Exposition Universelle in Paris in 1900. His work was also exhibited throughout Europe; in Munich, Barcelona, Prague, Athens and St. Petersburg, as well as in San Francisco, Tokyo and in South America.