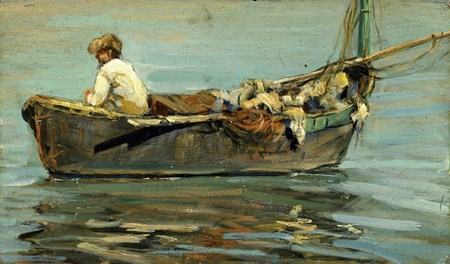 Alceste Campriani studied at the Accademia di Belle Arti in Naples from 1862 to 1869. There he befriended the painter Giuseppe de Nittis, with whom he painted landscapes in the open air as part of a group of artists known as the Scuola di Resina, regarded as the successors to the Neapolitan landscape artists of the previous generation, led by Giacinto Gigante, who had been known as the Scuola di Posillipo. Through de Nittis, Campriani gained an introduction to the influential Parisian art dealer Adolphe Goupil, who in 1871 signed a contract with the artist that lasted until 1884. This allowed his work to be better known elsewhere in Europe and also in America, although he was never to achieve the same international reputation and commercial success as such contemporary Italian artists as de Nittis Giovanni Boldini and Federico Zandomeneghi. Campriani worked for several years in Paris, and also participated in the annual exhibitions organized by the Società Promotrice di Belle Arti in Naples, becoming a member of the jury in 1885. He painted seascapes, Neapolitan landscapes and genre scenes, as well as the occasional still life subject, and also produced a number of views of Paris. Around the turn of the century he worked on decorations for the Caffe Gambrinus and the Stock Exchange in Naples. He was employed as a teacher at the Accademia di Belle Arti in Lucca between 1891 and 1921, eventually rising to the post of director in 1911. His son and pupil Giovanni was also a landscape artist, and also worked for some time in Paris. Paintings by Alceste Campriani are in the Galleria d’Arte Moderna in Rome and elsewhere.