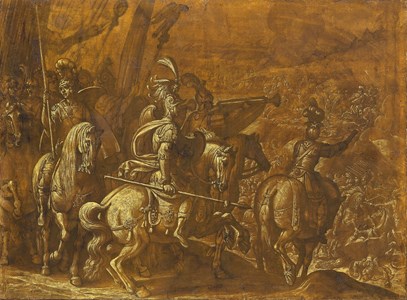 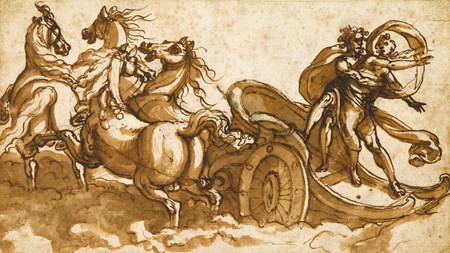 Active as a painter and frescante, as well as a draughtsman and printmaker, Antonio Tempesta was probably trained in the studio of Jan Stradanus in Florence. Like Stradanus, he may have worked under the supervision of Giorgio Vasari on the decoration of the Palazzo Vecchio. He was also a pupil of Santi di Tito, and is listed as a member of the Accademia del Disegno in Florence in December 1576. Not long afterwards, however, he settled in Rome, where he worked for the remainder of his career. Tempesta was employed by Pope Gregory XIII on the fresco decoration of several rooms in the Vatican, and also received commissions for paintings and fresco decorations for various churches and palaces in Rome. Further afield, he participated in the decoration of rooms at the Villa d’Este in Tivoli, the Palazzo Farnese at Caprarola and the Villa Lante at Bagnaia; the latter decorated with frescoes of hunting scenes. He also painted a number of easel pictures, sometimes on coloured stone. Although he worked in Rome for most of his career, Tempesta continued to earn significant commissions from Florentine patrons, including the Medici Grand Dukes, for whom he painted several battle scenes, as well as a Resurrection of Christ for the church of Santa Felicità in Florence. The artist remained active until at least 1627.Antonio Tempesta’s work as a painter remains much less well known today, however, than his activity as a draughtsman and printmaker. He was a productive etcher who, as one scholar has noted, ‘stands out as one of the most prolific and influential printmakers of the 17th century...[and] dominated the printmaking business in Rome between 1590 and 1630.’ Tempesta created more than 1,400 prints, including a large number of hunting and battle scenes. He also produced several etchings of battles between Christian soldiers and cavalry and infidel troops to illustrate editions of Torquato Tasso’s epic poem Gerusalemme Liberata. These kinds of cavalry and battle scenes are also the subject of many of the artist’s drawings, which often find echoes in his etchings. Tempesta’s battle compositions are generally scenes of dramatic action but often lack a single dominant figure, nor is there usually any sustained attempt at a narrative context. The artist’s interest in depictions of military campaigns and hunting scenes may be a legacy of his training with Stradanus in Florence, where he also would have seem similar battle scenes throughout the decoration of the Palazzo Vecchio. Antonio Tempesta was a fairly prolific draughtsman (though the number of his extant drawings is not on a par with that of his countless prints), and a large number of drawings by him are today in the collection of the Louvre, while other groups are in the British Museum, the Royal Collection at Windsor Castle, and elsewhere.