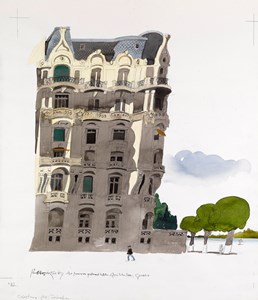 Born Arthur Paul Hoggarth in Kendal in Cumbria, Paul Hogarth studied at the Manchester College of Art and at St. Martin’s School of Art in London. Active as a watercolourist and printmaker, he was best known for the drawings and watercolours made on his extensive travels, many of which were used to illustrate books that he published. Hogarth also enjoyed a successful career as an illustrator. Beginning in 1962, he drew the covers for all of the novels of Graham Greene, published by Penguin Books, and developed a close friendship with the author. (He also illustrated books by Lawrence Durrell, Robert Graves and John Betjeman, among others.) Hogarth’s first one-man exhibitions were held in London in 1952 and 1953. A visiting Lecturer at the Royal College of Art, he became as Associate of the Royal Academy in 1974 and an Academician in 1984. He was awarded an O.B.E. in 1989. Drawings and watercolours by Hogarth are in the collections of the British Museum, the Victoria and Albert Museum and the Tate in London, as well as the Fitzwilliam Museum in Cambridge and the Yale Center for British Art in New Haven, CT.