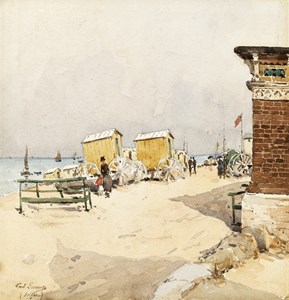 A landscape painter and watercolourist, Paul Lecomte was a pupil of Emile Lambinet. He made his debut at the Salon in 1868, gaining an honourable mention two years later, and thereafter exhibiting yearly until 1912. At the Salon of 1888 he was awarded a third class medal and in 1895 a second class medal. He also won a silver medal at the Exposition Universelle of 1900. Lecomte worked mainly in Paris, where he produced numerous urban views of the city, and in Normandy and Brittany, as well as in the South of France, the Basque region and England. His son, Paul-Emile Lecomte (1877-1950), was also a watercolourist.