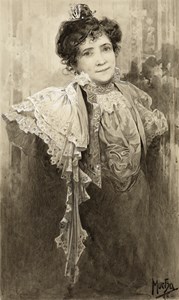 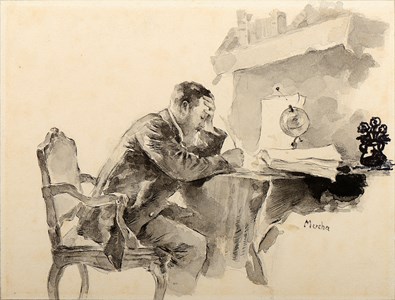 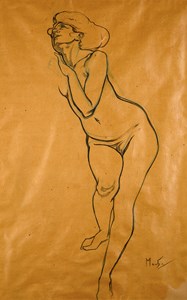 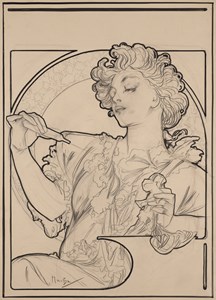 Born in 1860 in a small town in southern Moravia, then part of the Austro-Hungarian Empire, Alfons (Alphonse) Maria Mucha led the typical itinerant life of a young artist from Central Europe, studying in Vienna, Munich and finally Paris. His earliest works were in the form of decorative mural paintings, graphic designs for posters and calendars, and illustrations for books, magazines and newspapers. It was Mucha’s brilliant design for a poster depicting the celebrated actress Sarah Bernhardt in the title role of Victorien Sardou’s Gismonda, executed at the end of 1894, which was to secure his reputation. The success of the poster – a landmark of Art Nouveau design - led to a collaboration with the actress which was to last several years. Mucha signed a six-year contract to design posters for all of Bernhardt’s plays, becoming almost as famous as his legendary model. He also received frequent commissions for advertising posters and other commercial projects, each characterized by the artist’s iconic, graceful female form. Soon he had come to be regarded as the successor to the great poster designer and publisher Jules Chéret. Many of Mucha’s posters were widely reproduced as prints and postcards, to be sold to avid collectors and contributing greatly to the artist’s increasing renown and financial success. In 1897 a large exhibition of Mucha’s recent work was held at the offices of the artistic review La Plume in Paris, accompanied by a special issue of the magazine devoted to the artist. Known as the Salon des Cent, the exhibition showed nearly 450 works by Mucha – including designs for posters, calendars, menus, theatre programs, illustrations, advertisements and so forth - all executed within the previous two years. By this time the prosperous and successful artist was living and working in a large studio on the rue du Val-de-Grâce, where he entertained many of the notable literary and artistic personalities of the day. For the Paris Exposition Universelle of 1900, which launched le style Mucha to an international audience and popularized the Art Nouveau aesthetic with which he was so closely associated, Mucha was commissioned to decorate the Bosnia-Herzegovina pavilion. He began creating remarkable designs for jewelry for the goldsmith and jeweler Fouquet, the interior of whose shop on the rue Royale he also designed. At the suggestion of Baroness Salomon de Rothschild, Mucha visited New York in 1904 and again in 1905. His reputation having preceded him (a headline in the New York Daily News described him as ‘the Greatest Decorative Artist in the World’), Mucha was widely fêted and soon earned several portrait commissions. He spent several years in America, living and working in Chicago and New York and earning significant prices for his portraits. In 1910, with the financial support of an American patron, Mucha began working on an ambitious and long-cherished project for a series of twenty monumental paintings illustrating scenes from Czech and Slavic history. Known as The Slav Epic, this sequence of enormous canvases, each several metres in length, occupied the artist for eighteen years. The paintings were donated by Mucha to the city of Prague in 1928.