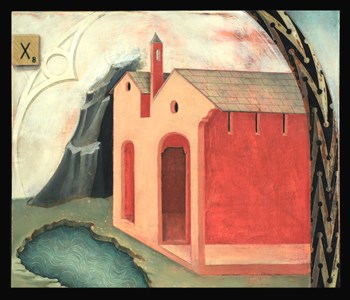 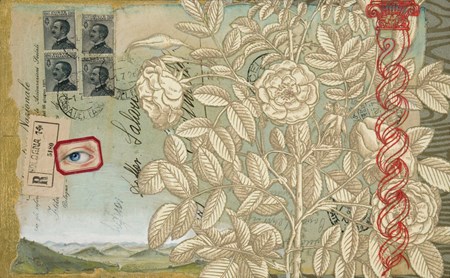 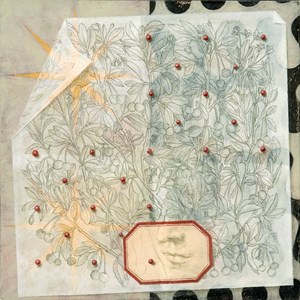 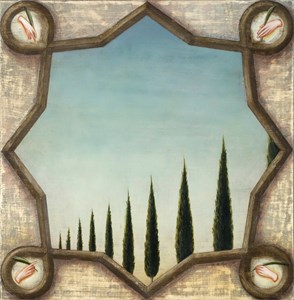 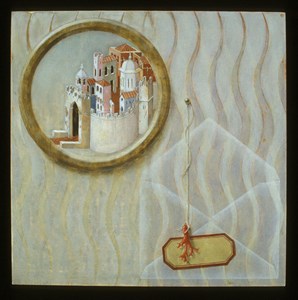 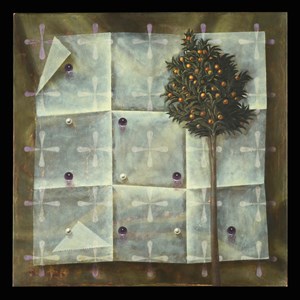 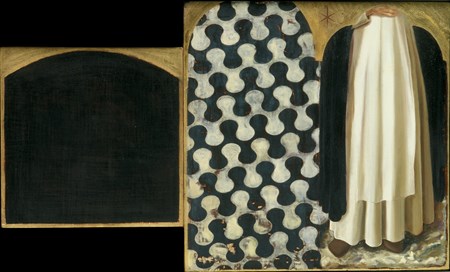 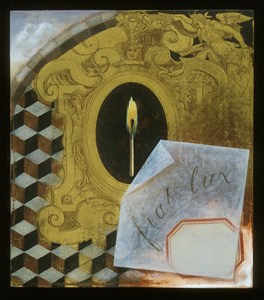 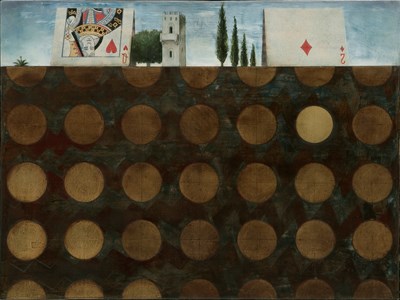 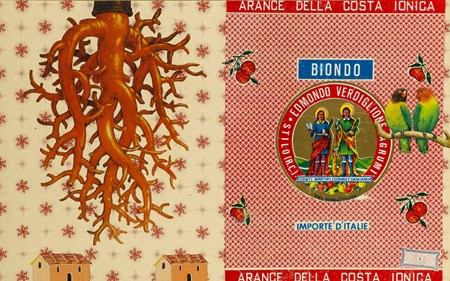 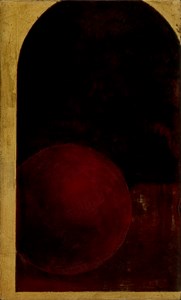 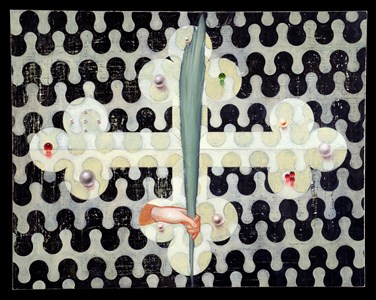 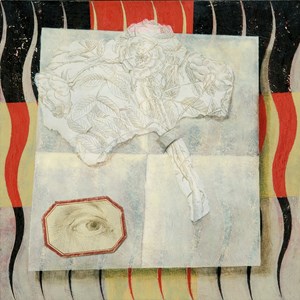 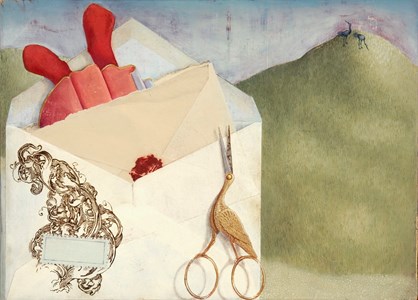 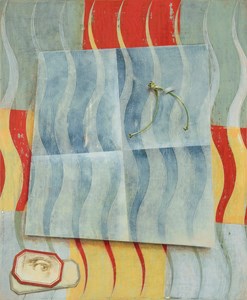 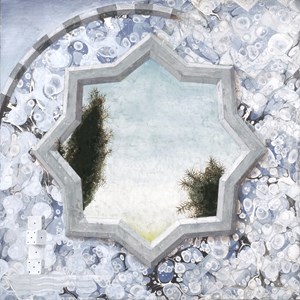 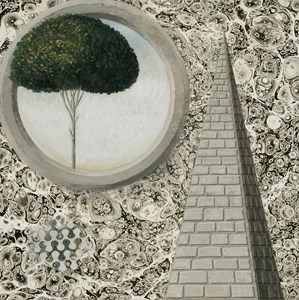 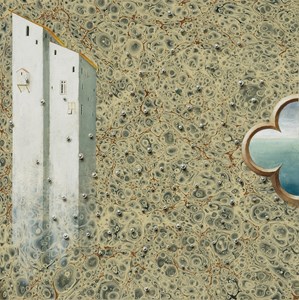 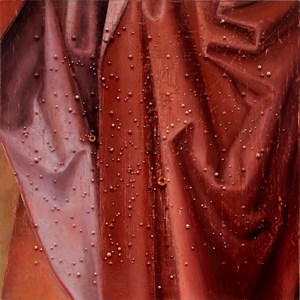 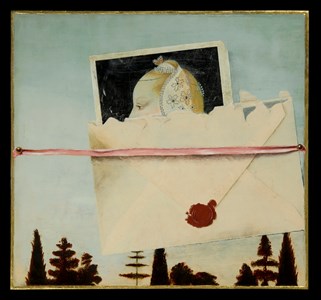 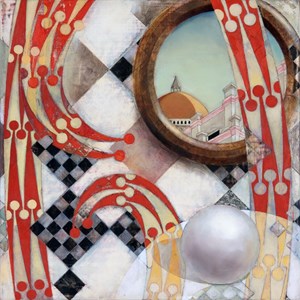 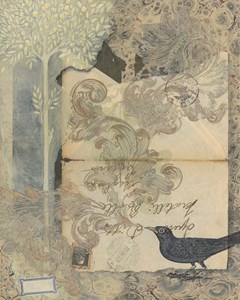 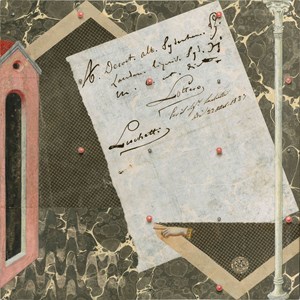 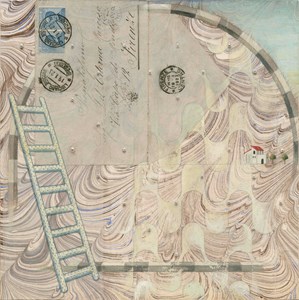 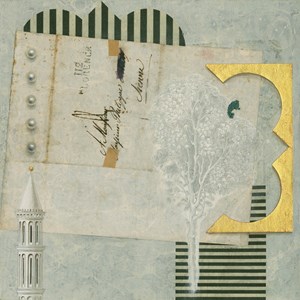 'Anne Connell invents worlds. Tiny, immaculate, and fascinating glimpses of worlds, to be precise. (And "precise" is the correct word to use here, because Anne paints with the detailed rigor of a master jeweler.) There is no actual place on earth that quite resembles her contrivances, but they have always evoked in me a deep sense of homesickness, nonetheless: a tangible longing to make myself very small and very quiet, so that I could slip somehow right into that world which does not—but which absolutely should—exist. That sense of enchantment, of magic, shimmers in every corner of this fabulist's work, and it is not easily forgotten.' [Elizabeth Gilbert].'Meticulous precision is a quality often associated with the machine age, but an equally exact manual execution reached and passed its apotheosis long before the first steam engine met its track. Such sharp perfection, born of infinite patience, relates to a time when creativity was not strongly associated with chaos, as it is in modern psychodynamic thought. Though Anne Connell’s exquisite paintings draw on this old-fashioned idea of ingenious order, and though they incorporate elements of specific antique paintings that the artist admires, they are neither post-modernist nor appropriationist, because their purpose is neither to comment on the transience of history nor to reflect the fallacy of authorship. Their impact is visual rather than conceptual, but they contain a wistful philosophy; they suggest a continuity that encompasses the continuity of loss. Though they are sometimes playful, they are also mystical. That shimmering, smooth surface, the decorative elements that rise sensually from the picture plane, the elegant fragments that seem almost flirtatiously to ask why and how they were selected, all seduce without giving away their secrets. You see at once that the work is beautiful, but you can tell that it is not simply about its own beauty. If what these paintings have to tell us could be translated into words, Anne Connell, a capable wordsmith, would have translated it. No—what we find in her orderly compositions is something profound and inchoate, an exquisite longing for how things were when they were better, a yearning that is entirely contemporary, the present moment’s insistence on precedents. If Anne Connell had lived in the Renaissance, her work would have used elements from Praxiteles, and if she’d been in fifth-century Athens, she’d have found her way to cave paintings, and the effect would have been identical, because her work is not about any particular past; it is about the sad, humorous, reassuring fact of the past itself.' [Andrew Solomon]'Combining a futuristic vision with a Renaissance technique, Anne Connell makes sumptuous icons for our age. Heraldic as flags, private as recurring dreams, her Vermeer-sized paintings - once seen - offer endless and consoling echoes. Connell's vision, though steeped in art history, stays quicksilver with its present-tense urgency. Her work resounds with a belief in art's imperative to question, always enriching, life's elegant inevitable surprises.' [Allan Gurganus]'In this modern age when penmanship is no longer taught, the paintings of Anne Connell feel less like paintings and more like the final, vital link to what we as a species must once have been capable of. Not all of us, of course, but surely there are a few geniuses in every generation. It’s just that these days the Rembrandts are designing sleeker dishwashers and iPhone covers. The talent meant for painting so rarely goes to painting anymore - which is why, seeing Anne Connell’s paintings for the first time, we may momentarily suspect we’re being tricked. Computer generated? A clever amalgamation of clip art? We peer into the frame. My God, she did that?So stunning is the skill with which Connell executes the fabric’s drape and spray of pearls, so far removed is this mastery of technique from anything we encounter in our daily lives, that it takes some time to be able to recognize that the real genius is in the composition. This is one of the deepest pleasures of the work, that every level of it stuns us into stillness. We must absorb the way she paints before we can begin to take in what it is she’s painted - the stack of dice which nearly vanish in the painting’s corner, white against white; the elegant sprawl of a signature across an opened envelope; the juniper trees peeking in through an ornate opening in a wall, the light of heaven behind them. The images interrelate like tarot cards, their combined elements spelling out a message we can’t quite read but which continually draws us in.I love these paintings at every level. No matter how often I come back to them, I find something else to teach me. The work is shocking in its authenticity, new in its patient understanding of everything that came before it. The pleasure of each piece is timeless, limitless.' [Ann Patchett]