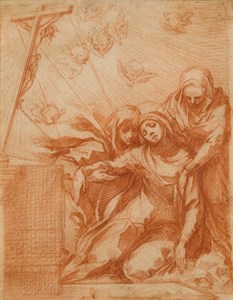 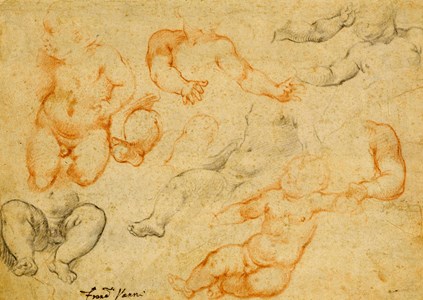 The leading painter in Siena at the end of the 16th century, Francesco Vanni began his training with his stepfather Arcangelo Salimbeni before entering the studio of Giovanni de’ Vecchi in Rome around 1581. Perhaps the most significant influence on the artist, however, was the work of Federico Barocci. For most of his career Vanni worked in and around Siena, where one of his earliest independent commissions was a Baptism of Constantine for the church of Sant’Agostino, painted in 1586. Later paintings followed for San Domenico, Santa Caterina, San Francesco and several other Sienese churches, including a Mystic Marriage of Saint Catherine painted in 1601 for the Chiesa del Rifugio. Vanni also worked in Pistoia, Cortona, Pisa and Rome, where he painted two scenes from the life of Saint Cecilia for the church of Santa Cecilia in Trastevere and a large altarpiece of The Fall of Simon Magus for St. Peter’s, completed in 1603. Together with his half-brother Ventura Salimbeni, Francesco Vanni came to dominate the artistic scene in Siena at the turn of the century.Vanni was a gifted and prolific draughtsman, whose drawings were highly regarded by Sienese artists of the late 16th and 17th centuries, in much the same way that Domenico Beccafumi’s drawings had a profound influence on artists of the previous generation. Vanni’s drawings were also in great demand among such contemporary collectors as Cardinal Leopoldo de’ Medici, who wrote in 1573 to his agent in Siena, charged with acquiring drawings by local artists, that ‘of those by Vanni I would take up to a hundred, so as to be able to form a special book [album] of them all.’ Several hundred drawings by Vanni survive today, with large groups in the Uffizi, the Louvre, the Kupferstichkabinet in Berlin and the Biblioteca Comunale in Siena.