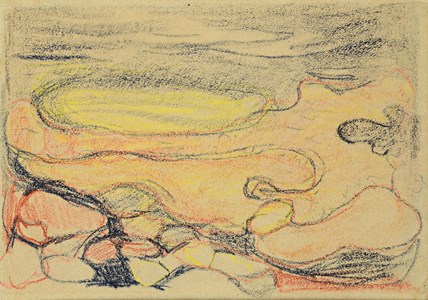 Born in the municipality of Løten in the Norwegian province of Hedmark, Edvard Munch was raised in Kristiania (now Oslo) from the age of one. His mother died of tuberculosis when Edvard was five years old, while his elder sister Sophie died of the same disease seven years later, aged just fifteen; the illness and deaths of his mother and sister were be themes he would later explore in his work as a painter. Munch trained briefly at the Royal School of Art and Design in Kristiania, and in 1885 made his first trip to Paris, returning in 1889 to study with the painter Léon Bonnat. Between these two trips, he had achieved a measure of both critical success and notoriety for his painting The Sick Child, shown at the National Annual Autumn Exhibition in Kristiania in 1886. Munch remained in Paris, supported by a grant from the Norwegian state, until 1891. The following year he was invited to Berlin to mount a one-man exhibition at the Verein Berliner Künstler. The exhibition caused a scandal and was closed after only a few days, but established the artist’s reputation in Germany. It was during this Berlin period that Munch began working on a project that came to be known as The Frieze of Life; a series of paintings on the themes of life, love, angst and death which was to occupy him for much of the rest of his career, and which came to include such seminal paintings as The Scream, Madonna, The Kiss, Melancholy and The Dance of Life. Exhibited at the Berlin Secession in 1902, the Frieze of Life paintings were to have a profound influence on German Expressionism in the early 20th century.Munch’s time in Berlin also found him beginning to work as a printmaker, through which he would come to develop countless themes that he also explored in his paintings. His first etchings and lithographs date from 1894, and in later years he would also work with woodcuts and colour woodcuts. One of the most influential and innovative graphic artists of the early 20th century, Munch was highly prolific as a printmaker, with an oeuvre that would come to number several thousand works. Between 1902 and 1908 the artist achieved a level of international fame, dividing his time between Berlin and Paris in the winter months, and spending his summers in Norway. In October 1908, however, he suffered a nervous breakdown, and entered a psychiatric clinic in Copenhagen for a period of convalescence of several months before eventually returning to Norway for good and settling down to a more peaceful, ordered life in the coastal town of Kragerø. Between 1909 and 1916 he painted a series of murals for the main hall of the university in Kristiania, and also painted several full-length portraits. By now a wealthy and successful artist, and something of a celebrity in Germany and Scandinavia, Munch settled in 1916 at Ekely, a rural estate on the outskirts of Kristiania. He would live there, working in relative isolation, for the rest of his life, painting Norwegian landscapes and scenes of rural life, and also continuing to produce prints. On his death in January 1944, Munch bequeathed his artistic estate to the city of Oslo, forming the basis of the Munch Museum, which opened in 1963. Edvard Munch drew throughout his life, and the collection of his work bequeathed to his native city included about 7,500 drawings and watercolours, of which more than half were sketchbook pages, contained in around 150 sketchbooks. As a draughtsman, Munch worked in charcoal, pencil, ink, watercolour, gouache and pastel, and many of his drawings can be related to finished paintings. On several occasions, the artist exhibited drawings (including watercolours and pastels) alongside his paintings.