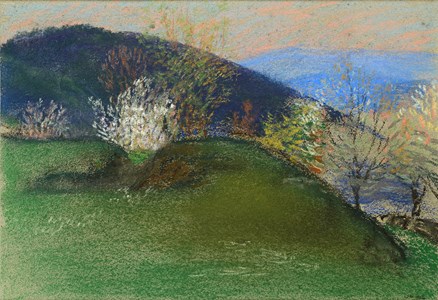 Born in Yorkshire, William Rothenstein entered the Slade School of Art in London in 1888, studying there with Alphonse Legros, from whom he gained a thorough grounding in the principles of academic draughtsmanship. The following year he enrolled at the Académie Julian in Paris, where he remained for four years. His time in Paris found the young Rothenstein befriending such artists as James McNeill Whistler, who was to be a dominant influence for several years, as well as Edgar Degas and Camille Pissarro. Rothenstein’s growing status as a portrait draughtsman in Paris led to a commission for a set of twenty-four portraits of Oxford academics, and on his return to England he continued to develop a reputation and market for his portraits. Indeed, throughout his career, portraiture – whether in the form of drawings, paintings or lithographs – formed by far the largest part of his output. In 1893, through Oscar Wilde, Rothenstein met the printmaker, draughtsman and illustrator Charles Haslewood Shannon, and the following year the two artists shared a joint exhibition of their drawings and lithographs at E. J. van Wisselingh’s Dutch Gallery in London. This was to be Rothenstein’s first major London exhibition, and included thirty-one of his works, mostly portrait lithographs as well as some drawings and pastels. Rothenstein later served as Principal of the Royal College of Art between 1920 and 1935.