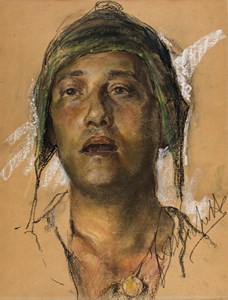 A pupil of Domenico Morelli at the Accademia di Belle Arti in Naples, Francesco Paolo Michetti enjoyed his earliest success in Paris, where he participated in the Salons of 1872 and 1875. However, it was not until 1877, when his large canvas of The Procession of the Corpus Domini at Chieti was exhibited in Naples to popular acclaim, that he secured his reputation in Italy. Michetti developed a distinctive style of painting, with the use of bold colours and vibrant effects achieved with a virtuoso technique. A common thread in his work is his interest in rural themes, and particularly the beliefs and traditions of his native Abruzzi region, seen in such paintings of the 1880’s as The Vow, now in the Galleria Nazionale d’Arte Moderna in Rome. A close friend of Gabriele d’Annunzio, who published an essay on the artist in 1896, Michetti exhibited frequently throughout Italy, often showing large groups of studies in pastel and tempera. At the third Biennale in Venice, held in 1899, Michetti was honoured with a retrospective exhibition of some two hundred works covering the whole of his career. His last major paintings, large canvases entitled The Cripples and The Snakes which continued his interest in local customs, were exhibited at the Exposition Universelle in Paris in 1900. After 1900 Michetti seems to have abandoned painting in favour of photography, becoming one of the first artistic practitioners of the new medium in Italy. In fact, by the early 1880’s Michetti had already begun to base his paintings and drawings on his own photographs, preferring these to using posed models in his studio. During the last thirty years of his life, Michetti continued to experiment with photography, while also producing a series of almost monochromatic drawings and sketches in gouache, oil and pastel, until his death in 1929.As a draughtsman, Michetti had a particular fondness for the pastel medium, which he was able to exploit for its strong colour and luminous effects. He was introduced to the medium by the painter Eduardo Dalbono, and from about 1877 onwards worked as a draughtsman almost exclusively in pastel or mixed media. His use of the pastel medium was also to be a distinct influence on a number of younger artists in Naples, such as Giuseppe Casciaro.