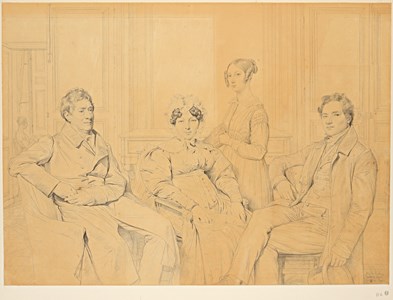 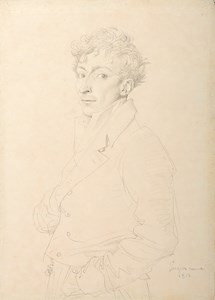 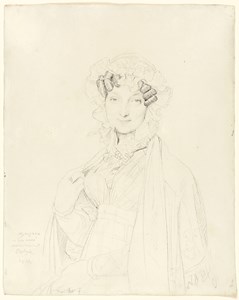 A student of Jacques-Louis David, Jean-Auguste-Dominique Ingres won the Prix de Rome in 1801, although due to a lack of government funding he was unable to take up his scholarship at the Académie de France in Rome until 1806. Although his pension expired in 1810, he remained in Rome for a further ten years. The city was at this time ruled by the French, and Ingres received commissions for paintings to decorate both the Villa Aldobrandini, the official residence of the French Lieutenant-Governor of Rome, and Napoleon’s palace at Monte Cavallo. He also found patrons among the French officials in the city, whose portraits he painted, as well as members of the royal court in Naples, led by Napoleon’s sister Caroline Murat and her husband Joachim, rulers of the Kingdom of the Two Sicilies. With the French withdrawal from Rome in March 1814 and the fall of Napoleon, however, Ingres found himself bereft of official commissions, and turned to making portrait drawings of French and foreign visitors to the city. These pencil portraits, drawn with minute detail as autonomous works of art, proved very popular and served to confirm Ingres’s reputation, allowing him to survive his difficult, penurious years in Rome. In 1820 Ingres received a commission for a large canvas of The Vow of Louis XIII, intended for the cathedral of his native Montauban. Painted in Florence and sent to Paris to be exhibited at the Salon of 1824, it won Ingres considerable praise and established his reputation as a painter. He then spent a period of ten years in Paris, where he consolidated his reputation as a history painter and began receiving portrait commissions. This was followed in 1834 by an appointment as director of the Académie de France in Rome, Ingres remaining in the post until his final return to France in 1842. The last fifteen years of his career saw Ingres firmly established as an influential and highly respected figure in artistic circles, and one of the foremost artists in France. For many years an influential professor at the Ecole des Beaux-Arts, Ingres received the honour of a retrospective exhibition at the Exposition Universelle of 1855.