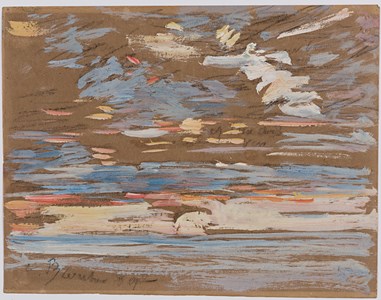 The son of a sailor, Louis-Eugène Boudin established a small stationery and framing shop in the port city of Le Havre. Encouraged by some of the artists living or working in the area, whose work he sometimes exhibited in his shop, he took up painting himself in 1847. By the early 1850’s he had established a modest career as a landscape painter, working in Le Havre, Rouen, Honfleur and Paris. Praised by contemporaries such as the critic Charles Baudelaire, Boudin began painting marine scenes that attracted much favourable comment when he began exhibiting regularly at the Salon from 1859 onwards. He travelled extensively around France, Belgium and the Netherlands, and made yearly visits to favourite sites in Normandy and Brittany, in particular the fashionable seaside resorts of Deauville and Trouville. Much of Boudin’s work was small in scale, and was shown both in Paris and in provincial exhibitions around the country. He found a ready market for his paintings and, from 1881 onwards, enjoyed a fruitful relationship with the dealer Paul Durand-Ruel, who sold his works in France and in America.Boudin's paintings and lively watercolours, with their interest in capturing effects of light and colour, were an important early influence on Claude Monet, who was his pupil. Some six thousand drawings, watercolours and oil sketches – most of the contents of Boudin’s studio at his death - are today in the Louvre, while other significant groups of drawings and watercolours were given by the artist or his descendants to the museums of Le Havre and Honfleur.