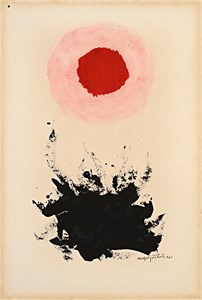 One of the founders and leaders of the seminal American movement known as Abstract Expressionism, Adolph Gottlieb was born in New York and studied with John Sloan at the Art Students League, and later at the Parsons School of Design and Cooper Union. He became a close friend of fellow artists Mark Rothko and Milton Avery, with whom he worked closely throughout the 1930’s, as well as Barnett Newman and David Smith. In 1941 he began to paint his first major series of works, known as Pictographs, several of which were exhibited the following year at the Wildenstein Gallery in New York. In 1943 Gottlieb became a founder member of a group known as the New York Artist-Painters, which included Rothko and John Graham. Gottlieb’s mature oeuvre can be divided into three major series of works produced, sometimes concurrently, in the 1940’s, 1950’s and 1960’s: the Pictographs of 1941-1953, the Imaginary Landscapes, dating from 1951 onwards, and, finally, the large Burst paintings begun in the late 1950’s, which are the artist’s best known works. The first painting of this type, entitled Burst, was exhibited at the Martha Jackson Gallery in New York in 1957, and was quickly followed in the same year by the closely related paintings Blast I (today in the Museum of Modern Art, New York) and Blast II. These vertical paintings of contrasting but balanced forms - an oval shape, sometimes with a halo or nimbus of thinned paint around it, in the upper half, and jagged black marks in the lower zone - were to provide a template for much of Gottlieb’s output between 1957 and his death in 1974. In the words of one scholar, ‘Oscillating as it does between figural and landscape implications, Gottlieb’s Burst image is a blood brother to Rothko’s stacked-rectangle and Newman’s vertical-band signature images. All have iconic force because of their upright posture, their holistic compression, and their drastic simplification. All are condensed, resonant, luminous, and powerful...In [Gottlieb’s] mature images he achieved what he saw as the quintessence of abstract art – the reduction to a simple resonating object that embodies maximum complexity.’ In succeeding years the artist expanded the dimensions of these paintings and began using colours other than red and black. In 1966 the contents of Gottlieb’s studio were destroyed in a fire, with the result that much of his output of the 1960’s is lost. A retrospective exhibition of the artist’s work, held at both the Guggenheim and Whitney Museums in New York in 1968, marked the apogee of his career. In 1970, however, Gottlieb suffered a stroke that paralyzed the left side of his body. Though confined to a wheelchair, he continued to paint until his death four years later.